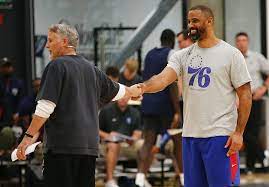 CELTS COACH (EX-SIXERS ASST) UDOKA MAY BE BOUNCED OVER AFFAIR!

ESPN is reporting that Celtics coach Ime Udoka is facing disciplinary action expected to include a significant suspension for his role in a consensual, intimate relationship with a woman who is a member of the franchise’s staff.

It isn’t believed that Udoka’s job is in jeopardy, but it is a possibility, and an announcement will be made today..

Udoka’s top assistant coach, Will Hardy, left to become coach of the Utah Jazz, and another Jazz finalist, Celtics assistant Joe Mazzulla, would likely be in serious consideration for an interim role, sources told ESPN.