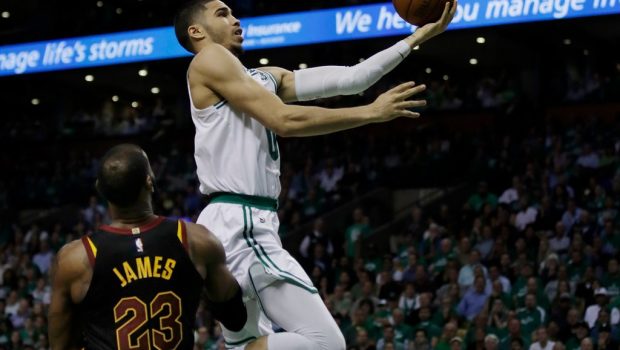 The Boston Celtics sure do prefer playing at home in TD Arena.

Jayson Tatum scored 24 points and Al Horford had 15 points and 12 rebounds as the Celtics beat the Cleveland Cavaliers, 96-83, and take a 3-2 lead in the Eastern Conference finals.

The Celtics remained perfect in Boston this postseason with their 10th straight victory at home and moved within one win of their first trip to the N.B.A. finals since 2010.

Game 6 is in Cleveland on Friday night, with the decisive seventh game back in Boston on Sunday if necessary. The home team has won every game so far in the series.

LeBron James had 16 points and 10 rebounds and Kevin Love scored 14 points for the Cavaliers, who are trying to reach the finals for the fourth consecutive season. James has played to the end in seven straight seasons.

The Celtics opened a double-digit lead in the first quarter and nursed it the rest of the way, holding on through a four-minute scoring drought that saw Cleveland score nine straight points to cut the deficit to 83-71. But Terry Rozier hit Horford with an alley-oop to snap the skid, and that was as close as the Cavs would get.

Boston went on a 15-3 run in the first quarter to turn a three-point deficit into a nine-point lead. The Celtics scored nine in a row at the end of the first quarter and into the second to take a 36-19 lead, their biggest of the game.

That’s when the Cavaliers fought back.

After a hard defensive play by Morris sent Larry Nance Jr. into the first row of seats, Morris appeared to wander over and say something. Nance to jump up and body checked him; Morris responded with a one-handed shove to the face.

Aron Baynes and Brown came in to break it up, and Terry Rozier put a body on Nance. After a review, the referees called technicals on Rozier, Nance and Morris. Kyle Korver made the foul shot to make it 36-20 and Cleveland went on a 9-0 run to cut the deficit to eight points, 36-28.

But Morris made a long 3-pointer to stop the scoring drought, and soon hit another to cap an 8-2 run that made it a double-digit lead.