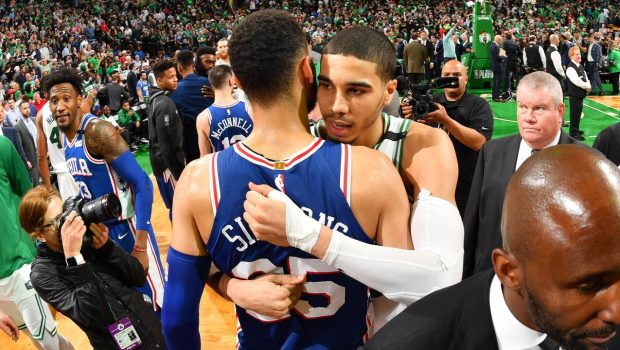 “I just kept reminding him that we almost swept them,” the Celtics Jayson Tatum says he told the Sixers’ Joel Embiid. “We should have swept them but we let them win one game.”

The Sixers season begins tonight in Boston, but the trash-talking has already begun.

With the two teams set to meet again on opening night, the trash talk should start fresh for two teams that are budding rivals.

While Tatum said the trash-talk was all playful, it’s clear the Celtics and 76ers are primed to be long-time rivals given their shared status as two of the East’s best young teams.

“Definitely some animosity,” said Tatum. “We won, so they are probably a little more fired up or angry than we are, but we’re excited to play. We had a lot of good matchups with them last year, a lot of great battles, especially in the playoffs.”

“You watch them all summer – I think they’re one of the most creative teams on offense and defense in the league,” said Stevens. “I greatly appreciate watching them as a basketball fan, let alone having a responsibility to prepare for them. So, yes, I enjoy watching them play. I think [coach] Brett [Brown] does a great job and obviously they’re phenomenal.”

While Stevens showered Philly with praise, Celtics guard Terry Rozier is excited for the trash-talk and hard-nosed play that undoubtedly awaits, particularly with Embiid on the other side of the court.

“It’s gonna be two teams getting after it, whether it’s biting, scratching, no matter what you have to do to win, that’s what it’s gonna be,” said Rozier. “I think we’re looking forward to it. I know I am. I like the stuff that Embiid talks. It’s good for basketball. It’ll get you hyped up, so you know, if they like it, we love it. It’s going to be a lot of fun. We ready for it.”

Tatum wouldn’t take the bait when asked whether the Celtics are currently ahead of the Sixers, especially given how Boston is adding a pair of All-Stars in Kyrie Irving andGordon Hayward to a team that won in five games during the playoffs.

Tatum noted how the Celtics can’t lean on what they did last season. Added Tatum: “It’s going to take some time for us to look as well as we did in the playoffs … we’re not going to be perfect.”

For his part, a sleepy Irving, who apologized to reporters for being tired and short with his responses before Sunday’s early afternoon practice, didn’t have much thoughts on the Sixers.

“I don’t know. All I know is destroy,” said Irving. “That’s all I know. So once we go out there that’s the only thing.”