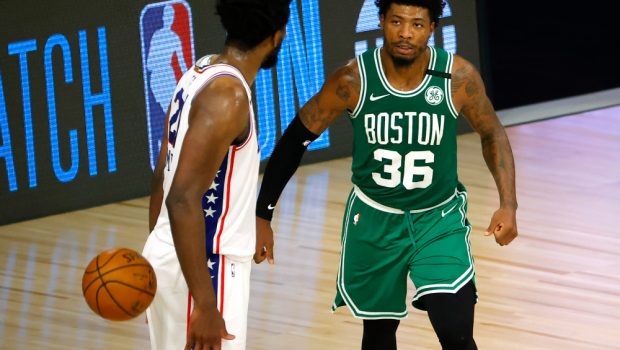 Through the years the Sixers’ fiercest rivalry has been with the Boston Celtics.

Going back to Wilt vs. Russell, Doc vs. Bird, Barkley vs. McHale, Philly vs. Boston has been a prime-time game.

But never has there been more whining than after last night’s Sixers 117-109 win at the Wells.

Joel Embiid made and took more free throws than the Celtics did as a team, going 17-of-21 from the line compared with 13-of-20 for Boston. The Sixers finished 36-of-45 as a team.

Embiid finished with 42 points, 10 rebounds, 2 assists and 2 steals, and only one turnover!

JoJo manhandled Tristan Thompson and Daniel Theis, scoring in double figures in each of the first three quarters and then scoring six points in the final seven minutes, along with making a key steal, to help put the Celtics away.

Part of that stretch, however, included Embiid making three trips to the foul line — trips Smart thought he made, in part, by embellishing contact.

“It’s tough,” Smart said. “It is tough. Especially when we’ve got our hands up a lot of the times, and he flails and gets the call, and then down on the other end we’ve got our guys attacking the rim, getting a lot of contact, and we’re just not getting the whistle. It’s tough to play like that. It’s tough.

“If the roles were reversed, I’d do it every time. I mean, I’d be on too if every time I threw my arms up or every time I got touched, I’m going to the free throw line. I mean, it’s kind of hard not to get into a rhythm that way when you shoot 21 free throws alone and they allow you to hack on the other end.

“It’s tough, but we battled. The team did a good job. We were right there to give ourselves a win and try to run it back again on Friday.”

Embiid was informed during his postgame interview of Smart’s comments. Naturally, the big man had a few thoughts about how Smart saw the game play out, pointing out that Smart is rather well known himself for selling calls to the officials.

“Marcus Smart just told me that I flail a lot?” Embiid said. “Come on. I’m sure he knows himself, and he knows his game, too, he does a lot of that. And I don’t think I do. I mean, if you watch basketball and if you’re a student of the game and if you actually pay attention during the game, we all see. Every single foul, I get fouled. They probably don’t call all of them, like the last one. There was three minutes left, I went up, and that was a foul and they knew it, but they didn’t call it. So there’s a lot that they don’t call, and there’s a lot that they call because you have to.