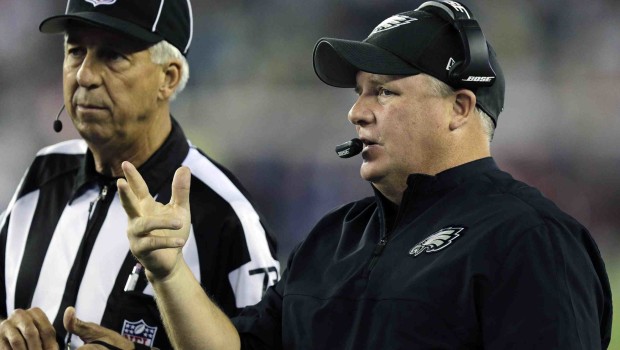 Lots of gridheads become unhinged when the subject is Eagles coach Chip Kelly.

There are some in the lame-ass Philly media who think Kelly, whose Birds are 0-2 so far this season, is already plotting his path back to college — probably Texas.

And there are the ChipBots, who believe that Kelly walks on water and can do no wrong.

Then there is former New York Jet and current NFL on CBS contributor Bart Scott.

Now he is a member of that media, eligible to carry the same credentials as those he so recently tried to prevent from doing their jobs.

And have an opinion.

“He can’t win. You know why he can’t win? Because you can’t win and tell people that you devalue great players and get rid of them just because you want to. So I think there’s a little bit of karma coming back to him,” Scott said on New York’s sports talk radio station WFAN..

“Nelson Agholor hasn’t replaced Jeremy Maclin. Jeremy Maclin was a class act guy. You can’t just replace people like they’re things, you know what I mean? Like they’re toys that you’re tired of playing with because you want something new. So I hope that he loses. I hope he loses every game.”

And with that kind of venom and lack of objectivity, we hope CBS fired Bart Scott.