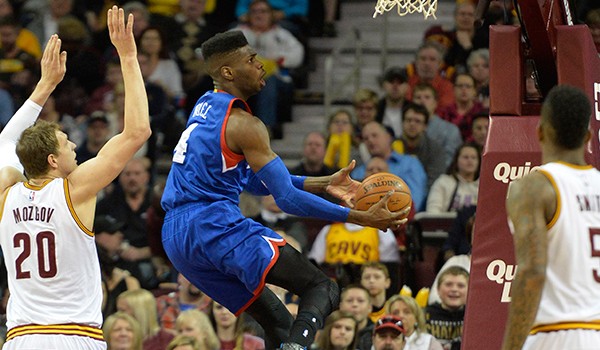 CAVS SQUEAK BY SIXERS, WHO HAD A CHANCE TO WIN IN LAST SECONDS

How far have the Sixers come in this season that started with no expectations?

They lost 87-86 last night to the Cleveland Cavaliers — one of the powers in the Eastern Conference — who earned their 16th straight home victory.

But the Sixers, who have one of the worst records in the NBA but have improved notably in the past two months, could have won the game in the last seconds.

LeBron James scored 20 points, Kyrie Irving added 17 and the Cleveland Cavaliers hung on even though they were held scoreless in the final 4:04.

Trailing by a point, the 76ers called timeout with 8.5 seconds left. Nerlens Noel (photo above) missed a shot in the lane and Tristan Thompson was fouled while grabbing the rebound. Cleveland called timeout to inbound the ball at midcourt. The pass was tipped away as time ran out.

Robert Covington scored 19 points to lead Philly, but missed two free throws with 1:07 left that could have put the 76ers ahead.

Cleveland sustained two injuries during the game. Kevin Love strained his lower back in the fourth quarter while Iman Shumpert injured his left ankle while missing a breakaway dunk in the second quarter.