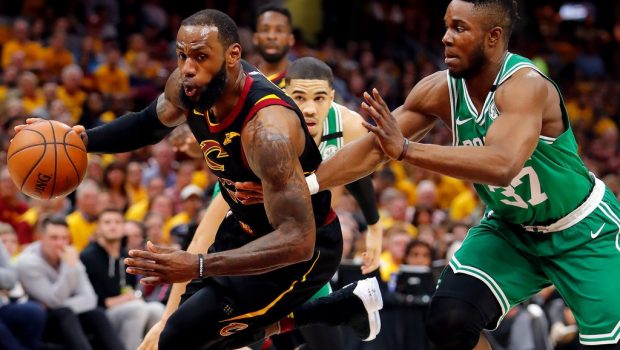 The Boston Celtics looked invincible in winning their first two East finals games against the Cleveland Cavaliers in Boston.

Then the series shifted to Cleveland last night, and:

LeBron James had 27 points and 12 assists, Kevin Love added 14 rebounds as the Cavs broke through with a 116-86 victory in Game 3 over the Boston Celtics on Saturday night.

The Cavs built a 19-point lead in the first quarter, pushed it to 30 in the second half and overpowered the Celtics, who fell to 1-5 on the road in the postseason.

Kyle Korver made four of the Cavs’ 17 3-pointers and Cleveland had six players in double figures.

Game 4 will be played Monday night before the series returns to Boston.

Jaylen Brown was in foul trouble all night and scored just 10 for the Celtics after averaging 23 in the first two games. Jayson Tatum scored 18 and Terry Rozier 13 for Boston.

Only 19 of a possible 300 teams have ever overcome a 2-0 deficit in the playoffs. James and the Cavs, who previously did it in 2007 and again in 2016 while winning the NBA title, took the first step toward a third comeback.

“That doesn’t bother me,” Cleveland Coach Tyronn Lue said before Game 3. “The games have to be played. They won two games on their home court, which we know they’ve been playing well the whole playoffs, but we’re not discouraged.”

The Cavs came in wanting to play faster and be more physical against the younger Celtics, who were the aggressors in Games 1 and 2.

Hill finished with 13 points, J. R. Smith had 11, and Cleveland’s supporting cast played so well that James only had to play 37 minutes.

Boston Coach Brad Stevens was confident his team would play better on the road than it did earlier in the playoffs, but the Celtics were shaky early, committing four turnovers and shooting 2 of 10 while the Cavs opened a 27-11 lead.

James arrived at 5:45 p.m., greeted by the usual phalanx of cameras waiting to record his walk from the security entrance at Quicken Loans Arena to Cleveland’s locker room.

Earlier in the day, James said the fact he has twice rallied from 2-0 deficits in the postseason offered no relief.

“There’s nothing about the playoffs that’s comfortable until you either win it all or you lose and go into the summer,” he said.

For James and the Cavaliers, summer might not be as close as it once seemed.