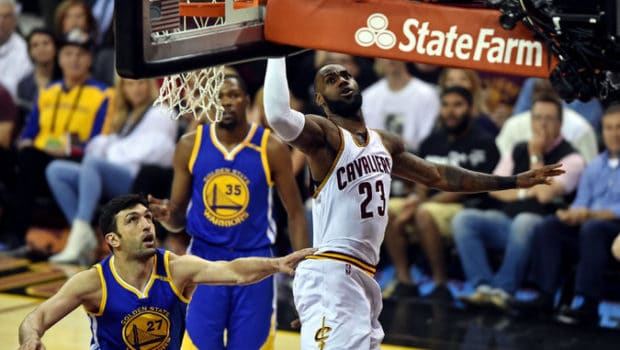 The Golden State Warriors insisted that a 16-0 run in the playoffs was not their goal, that a championship was all that mattered.

Well, now that rubber has hit that road!

LeBron James, Kyrie Irving and the Cavaliers put on a record-setting offensive display in a 137-116 victory that will send the series back to Oakland, Calif., for a game 5 on Monday night.

Here’s a look at what happened in game 4:

The Cavaliers were explosive right away, scoring an N.B.A. finals record 49 points in the first quarter. They went on to set N.B.A. records for points in a half (86) and for 3-pointers (24).

Irving led all scorers with 40 points, but James was still the catalyst for the Cavaliers, recording yet another triple-double with 31 points, 11 assists and 10 rebounds. Cleveland outscored Golden State by 32 points with James on the court but were just plus-7 in Irving’s 41 minutes.

The Warriors had five players score in double figures, had 26 assists, and got 35 points from Kevin Durant, but it was not nearly enough on a night in which the team’s defense fell apart. They were leading all playoff teams this year in defensive efficiency coming into the game, but had no answer for Kevin Love, James or Irving.

There were several arguments on the court, several hard fouls, a fan was ejected for arguing with the Golden State bench, and Dahntay Jones of the Cavaliers got a technical called against him without even entering the game. The referees even had to retroactively change a technical foul called against Draymond Green in the first half to avoid having to eject the star forward. When asked about the testiness after the game, Love laughed about it, saying “It was bound to get scrappy eventually.”