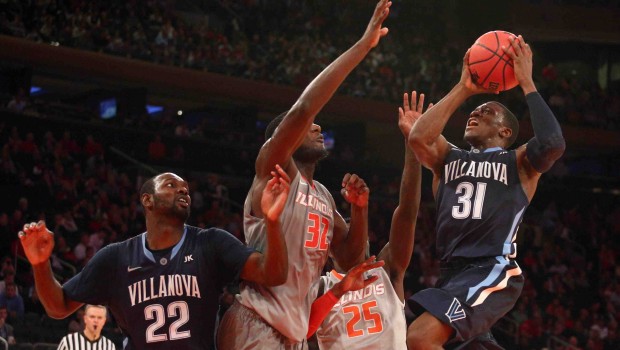 It’s not every night that undefeated Villanova can crow about players who are not guards or small forwards making a big contribution.

But coach Jay Wright was doing just that about 6-11 junior center Daniel Ochefu after Tuesday night’s 73-59 victory over Illinois in the Jimmy V Classic at Madison Square Garden. Wright took the wraps off Ochefu (left) in the post to neutralize Illinois’ swarming perimeter defensive pressure to remain unbeaten.

After struggling to convert from outside throughout the evening, Villanova looked inside to Ochefu, who has become an offensive threat, one of about a half-dozen the Wildcats employ on a given night. Ochefu finished with 12 points, 6 rebounds and 4 blocks, but Wright was happiest with his 10 second-half points.

“If we didn’t get that tonight, we wouldn’t win the game,” Wright said. “They were an outstanding perimeter defensive team, outstanding. We had zero 3s at halftime.”

Dylan Ennis (photo above) scored 18 points, but, “It’s never one guy taking over the game,” Ennis said. “I think that’s what’s so great about us. We play as a team no matter if we are up or down, or in a tie game. I never thought of taking over the game. I just wanted to do what I do for the team and try and get the win.”

“A really good win for us against a very, very good team,” Wright said. “There were spurts of that game that looked really ugly, but it was two very good defensive teams.”

The Wildcats had five players score eight or more points. It’s the kind of balanced scoring that Wright would like to consistently get from his team.

“As a coach you feel really fortunate to have a lot of weapons like that and guys that will accept that from each other,” Wright said.

Rayvonte Rice, the leading scorer for the Illini, struggled from the field, shooting 4 of 13 to score just 10 points.

Villanova went on a 15-4 run after Ochefu’s layup at 6:21 of the second half and then slowly pulled away.