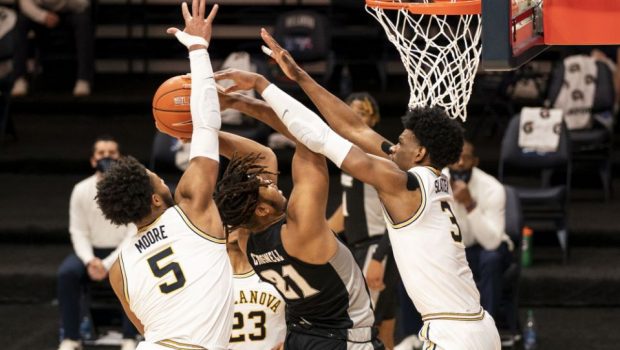 CATS SCRATCH BACK IN 2ND HALF TO PUMMEL PROVIDENCE!

By Jack Ryan and the Associated Press

Collin Gillespie and Justin Moore each scored 15 points as No. 3 Villanova dominated in the second half to defeat Providence 71-56.

Villanova was back on the court for just the second time since Dec. 23 due to multiple COVID-19 stoppages. The Wildcats eked out a 76-74 home win over Seton Hall in their return on Tuesday, and with a few practices this week, the Wildcats still looked rusty in the first half, when they shot 27% from the field while committing seven turnovers.

But a Gillespie 3-pointer at the halftime buzzer sent Villanova into the locker room down just 27-24.

The Wildcats surged in the second half, and resembled the national championship contenders they have become under Jay Wright.

They made 10 of their first 21 second-half shots, and Jeremiah Robinson-Earl’s dunk on a pass from Moore made it 50-38 Villanova with 10:12 remaining. That capped a 26-11 run after halftime for the Wildcats.

Villanova got contributions from six players during the key spurt, with Daniels’ eight points and Moore’s six leading the way.