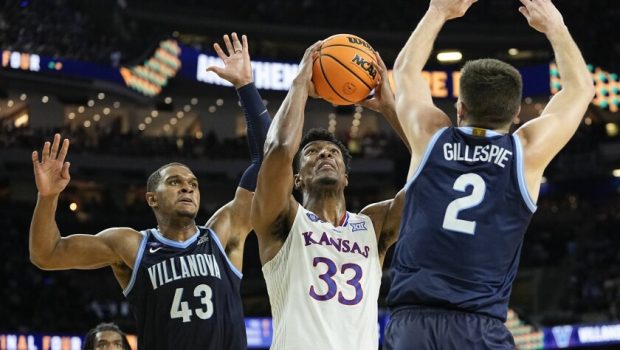 CATS CRASH AND BURN AND KANSAS WAS NEAR-PERFECT!

Kansas kicked Villanova from the opening tipoff on the way to an 81-65 win to advance to Monday’s national championship game.

KU was up 10-2 on Villanova at the first TV timeout. That was the closest the game was until Villanova cut the deficit to seven with nine minutes to go.

Villanova got the lead down to six with approximately six minutes to go but David McCormack made sure that the Wildcats weren’t going to cut the lead any further. He got a putback on an offensive rebound to extend the lead to eight and blunt any momentum that Villanova thought it had.

Villanova was outmatched from the start thanks to the absence of all-Big East guard Justin Moore. He tore his right achilles in the Wildcats’ Elite Eight win and likely would have spent time guarding Agbaji. Could he have prevented Agbaji from starting 6-of-6 from 3-point range? Maybe. Maybe not. But it’s clear that Villanova missed him. Agbaji didn’t miss his first shot of the game until late in the second half.

The Wildcats also struggled inside against McCormack. He finished with a season-high 25 points as Kansas made it clear that he would feature heavily in the post.

It was a smart idea. McCormick was 10-of-12 from the field and forced Villanova to leave other Kansas players open on the wings when he got the ball down low.

Kansas is in its 16th Final Four and fifth under Bill Self. But the Jayhawks have won just one national title in Self’s 18 previous seasons at Kansas despite winning over 81% of its games with him in charge.