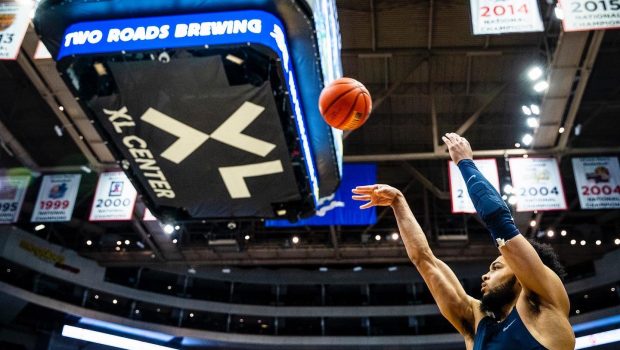 CATS AND DOGS: NOVA CLIPPED BY UCONN IN A BIG EAST WAR!

A sweatshirt worn by a UConn student last night read:

And they did, as the Connecticut Huskies beat the Villanova Wildcats in a Big East game that summoned memories of the conference’s glory days of Rollie Massimino and Jim Calhoun.

Fast forward, and it’s Jay Wright and Dan Hurley on the sidelines.

Except last night, when Hurley was tossed on two T’s.

R.J. Cole hit a floater with 5.9 seconds left and then took a charge from Collin Gillespie at the other end to rally No. 21 Connecticut to a 71-69 victory over the visiting eighth-ranked Wildcats.

Adama Sanogo scored 20 points and Tyler Polley drained a clutch 3-pointer for the Huskies (20-7, 11-5 Big East), who saw their coach ejected from the game in the first half.

“It was two great teams battling it out and down the stretch they made the plays,” coach Jay Wright said. “We didn’t make the plays. It was that close of a game.”

Villanova had a four-point lead and the ball with 35 seconds remaining. But then Caleb Daniels missed the front end of a 1-and-1 for the Wildcats, the best free-throw shooting team in the country, and Villanova was outscored 6-0 the rest of the way.

UConn led by one at halftime and seven early in the second half, but could not shake the Wildcats.

A 3-pointer from Gillespie gave Villanova its first lead of the final 20 minutes at 56-54, and the teams went back and forth over the final eight minutes.

Polley’s third 3-pointer of the second half with 21 seconds left brought the Huskies to 69-68. Cole then tied up Gillespie in the backcourt to force a turnover, setting up the winning play. The left-handed Cole drove toward the basket along the right side and tossed in a tough, contested shot with his right hand.

Nova had one more chance and Gillespie drove the length of the court, but right into a waiting Cole and never got a shot up.

“It’s something he’s done all year,” said associate head coach Kimani Young, who coached in Hurley’s absence. “There was not surprise there, but just shows his toughness, his grit, his will.”

Hurley was tossed from the game after receiving back-to-back technical fouls with just under five minutes to go in the first half.

He picked up his first for slamming his fist on the scorers’ table protesting the lack of a call on what he thought was a Villanova foul. He was tossed from the game seconds later by referee James Breeding after turning to the crowd and waving his arms in the air, imploring fans to get loud.

“It was surreal. I was stunned,” Hurley said. “I guess I’ll wait to see what the Big East (does). I’m very eager to find out from the head of officials what the explanation was.”