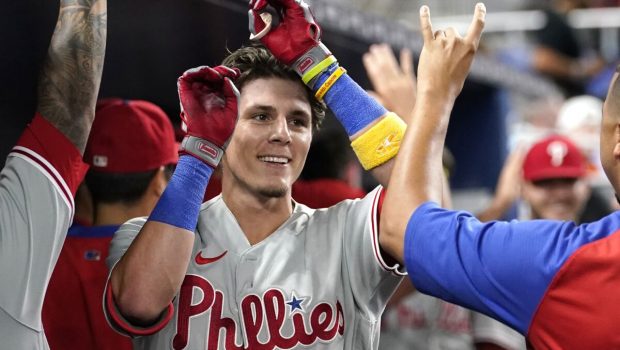 CASTELLANOS ON THE SHELF, SO MATON HAS BECOME PHILS KING NICK!

Nick Maton homered off Miami ace Sandy Alcantara for the second time in a week, hitting a go-ahead, two-run drive in the seventh inning that led the Phillies past the Marlins 2-1.

“I hope I play the rest of my career with that guy,” Phillies starter Bailey Falter said. “He’s always motivated. Brings the guys together. Always that hyper guy. Especially around this time of year, where everybody tends to get a little tired, we’ve got that guy to pick us up. He does it on the field, and he does it in here, too.”

Philadelphia won its fourth in a row, and tightened its grip on the second spot in the NL wild-card race. The Phillies lead San Diego by 1 1/2 games.

The 24-year-old Maton, in his second big league season, has played right field while Nick Castellanos recovers from an oblique injury.

“I’m just trying to contribute in any way I can,” Maton said. “Whether that’s on the bench, or whether I’m playing. Anything I can do.”

Alcantara fell to 1/3 in six starts against the Phillies this season. Maton, who has five home runs this season, connected off Alcantara last Thursday during a 6-5 loss to the Marlins at Citizens Bank Park.

It was 1-0 when Jean Segura hit a one-out single off Alcantara (12-8) in the seventh and Maton connected on an 0-2 pitch. Earlier in the game, Maton grounded out with the bases loaded against the All-Star right-hander.

“That’s been kind of how it’s been all year,” Thomson said. “These kids have come up from the minor leagues and just played well and fit right in and contributed almost on a daily basis. I thought Falter was really efficient today. I thought he got better as the game went on.”

The Phillies then got perfect innings from relievers José Alvarado and Seranthony Domínguez, and David Robertson followed with a perfect ninth for his 20th save.

Alcantara was lifted after seven and reached 200 innings for the second consecutive season. The NL Cy Young Award contender gave up two runs, eight hits, walked one and struck out four.

“It means a lot to me. I thank God for keeping me healthy,” Alcantara said of pitching 203 2/3 innings this season. “Super happy about it. And hopefully, it won’t be just last year and this year but every year.”

Segura had three hits for the Phillies, who opened a six-game road trip that will include a trip to the NL wild-card leader Atlanta after the series in Miami.

Bryan De La Cruz’s solo home run in the fifth, which snuck just inside the left field foul pole, gave Miami a 1-0 lead. Before that, the Phillies could not capitalize on multiple scoring opportunities.

Philadelphia stranded runners in scoring position in the second and fourth. In the second, Segura hit a two-out single, but was caught stealing second by Miguel Rojas.

In the fourth, Alcantara gave up three straight two-out singles to Alec Bohm, Bryson Stott and Segura, but the Phillies couldn’t capitalize with the bases loaded. Maton grounded out to end the threat.