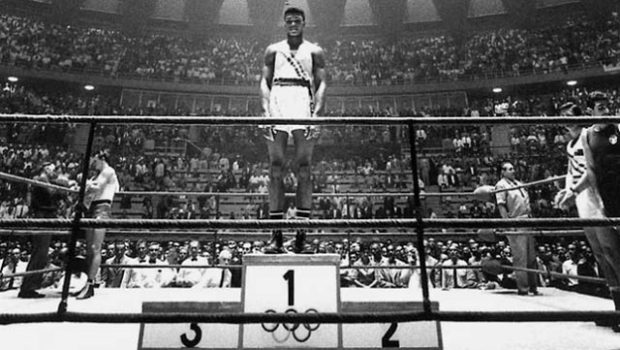 CASSIUS CLAY, FROM A LOUISVILLE CHILDHOOD TO 1960 OLYMPIC CHAMP

Cassius Marcellus Clay Jr. was born in Louisville on Jan. 17, 1942, into a family that included teachers, musicians and craftsmen.

Some of them traced their ancestry to Henry Clay, the 19th-century representative, senator and secretary of state, and his cousin Cassius Marcellus Clay, a noted abolitionist.

Beyond his father’s teachings, Ali traced his racial and political identity to the 1955 murder of Emmett Till, a black 14-year-old from Chicago who was believed to have flirted with a white woman on a visit to Mississippi. Clay was about the same age as Till, and the photographs of the brutalized dead youth haunted him, he said.

Cassius started to box at 12, after his new $60 red Schwinn bicycle was stolen off a downtown street. He reported the theft to Joe Martin, a police officer who ran a boxing gym. When Cassius boasted what he would do to the thief when he caught him, Martin suggested that he first learn how to punch properly.

It was Martin who persuaded Clay to “gamble your life” and go to Rome with the 1960 Olympic team despite his almost pathological fear of flying.

Clay won the Olympic light-heavyweight title and came home a professional contender. In Rome, Clay was everything the sports diplomats could have hoped for — a handsome, charismatic and black glad-hander. When a Russian reporter asked him about racial prejudice, Clay ordered him to “tell your readers we got qualified people working on that, and I’m not worried about the outcome.”

“To me, the U.S.A. is still the best country in the world, counting yours,” he added. “It may be hard to get something to eat sometimes, but anyhow I ain’t fighting alligators and living in a mud hut.”

Ali would later cringe at that quotation, especially when journalists harked back to it as proof that a merry man-child had been misguided into becoming a hateful militant.

After the Rome Games, few journalists followed Clay home to Louisville, where he was publicly referred to as “the Olympic nigger” and denied service at many downtown restaurants. After one such rejection, the story goes, he hurled his gold medal into the Ohio River. But Clay, and later Ali, gave different accounts of that act, and according to Thomas Hauser, author of the oral history “Muhammad Ali: His Life and Times,” Clay had simply lost the medal.

Clay turned professional by signing a six-year contract with 11 local white millionaires. (“They got the complexions and connections to give me good directions,” he said.) The so-called Louisville Sponsoring Group supported him while he was groomed by Angelo Dundee, a top trainer, in Miami.

At a mosque there, Clay was introduced to the Nation of Islam, known to the news media as “Black Muslims.” Elijah Muhammad, the group’s leader, taught that white people were devils genetically created by an evil scientist. On Allah’s chosen day of retribution, the Mother of Planes would bomb all but the righteous, and the righteous would be spirited away.

Years later, after leaving the group and converting to orthodox Islam, Ali gave the Nation of Islam credit for offering African-Americans a black-is-beautiful message at a time of low self-esteem and persecution. “Color doesn’t make a man a devil,” he said. “It’s the heart and soul and mind that count. What’s on the outside is only decoration.”