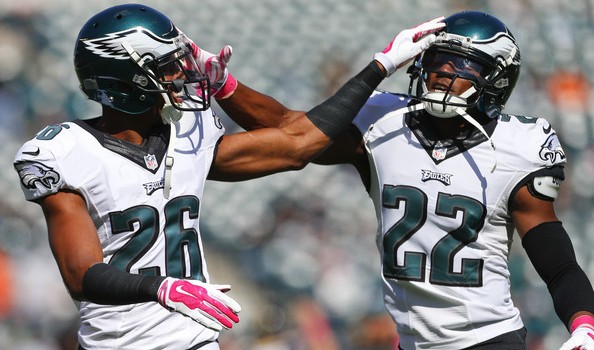 CARY WILLIAMS TURNS FROM A WHINING LOSER TO A GOOD SOLDIER

So, Cary Williams (left in photo above with Brandon Boykin), the Eagles’ whining cornerback, complained a while back that coach Chip Kelly’s arduous practices have left the defense with nothing in their tanks.

Now, after a meeting with the coach and, presumably, a come to Jesus meeting of his mind and his body, he has turned into a cheerleader.

After the Eagles allowed the St. Louis Rams to come back from a 27-point deficit and get the ball to midfield in the final minute down by six, Williams said:

“Finish. We just need to finish.”

After his rant about the team’s practices after the Eagles held on to beat Washington for their third straight win to start the season, and an impromptu meeting with Kelly the next day, the usually outspoken Williams has become the good soldier.

“We just need to make a play,” Williams said after the game. “They made plays. But we got the win and a win is a win. This is the NFL. That’s a NFL team. They’re going to make plays, too. Just because we were ahead they weren’t going to quit. We can’t expect them to quit. Hopefully, we’ll do a better job next time.”

Next time is the Giants, who the Eagles face in a crucial early-season NFC East showdown at Lincoln Financial Field and on Football Night in America.

The Giants, after a 0-2 start, have won three straight and their offense Sunday became more dangerous with the addition of first-round draft pick Odell Beckham, who caught a touchdown pass in his first NFL game.

Williams wouldn’t address the next opponent, not yet. He did say the Eagles defense was getting there.