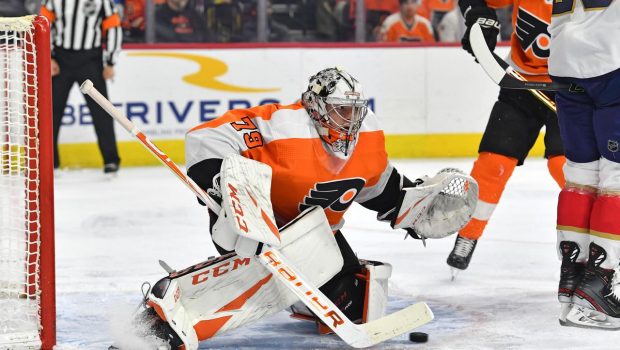 James van Riemsdyk had a goal and an assist as the Flyers beat the visiting Florida Panthers 4-1 and improved to 19-5-4 at home.

Ivan Provorov, Travis Sanheim and Claude Giroux each had one goal for the Flyers, who posted their second win in a row and their fourth in five games.

Flyers goaltender Carter Hart made 30 saves in his first start since Jan. 13 against the Boston Bruins. The Flyers went 6-2-1 while Hart recovered from an abdominal strain.

MacKenzie Weegar scored the lone goal for the Panthers, who dropped to 1-4-1 in their six games since the All-Star break.

The Panthers quickly jumped out to a 1-0 lead when Weegar sent a slap shot through Hart’s legs at 3:07 of the first period. Weegar netted his fourth goal of the season.

Provorov tied the game at 1 at 13:58 and took advantage of the fact that Florida defenseman Riley Stillman broke his stick. It was Provorov’s 10th goal of the season.

Philadelphia went ahead 2-1 at 5:24 of the second period. Jake Voracek sent a pass in front, and van Riemsdyk tapped the puck easily past Bobrovsky for his 16th goal.

Florida’s Aleksander Barkov had two strong scoring chances midway through the second, but Hart turned aside both shots.

From there, the action became wide open and fast-paced with the Flyers taking advantage as Sanheim corralled a rebound and scored with 51.1 seconds left in the second for a 3-1 lead. After van Riemsdyk took the initial shot, Bobrovsky was unable to gather the puck, and Sanheim capitalized for his eighth of the campaign.

The Panthers stayed close in the third period, killing off a pair of power plays, including a two-man advantage for 17 seconds.

Florida was then awarded a power play at 10:35 when Nicolas Aube-Kubel was whistled for interference. However, the Flyers actually had the best scoring opportunity short-handed as Kevin Hayes nearly scored.

Philly’s Scott Laughton was called for slashing at 18:32, and Bobrovsky was also pulled for an extra skater. Giroux then scored on the empty net at 18:51.