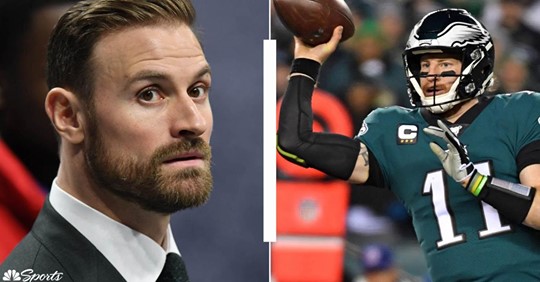 ‘CARSON’S TO BLAME FOR HIS MISTAKES,’ EX-EAGLE CHRIS LONG SAYS!

Ex-Eagle Super Bowl champion defensive end Chris Long had no problem assigning blame for the sad state of the Eagles on yesterday’s episode of his Green Light podcast.

Long tried to break down what exactly has gone wrong, and while he hit the same walls as Eagles fans have been hitting all year – we simply don’t know! – he made some really good and insightful arguments, including one that’s hard to fault:

“They just paid [Wentz] in 2019. After the game, people are asking – Doug says he doesn’t bench him because it would be the wrong move for the football team, it would signal something, it would send a clear message that this thing is over.

“I think for one, [Doug]’s acknowledging that Hurts doesn’t necessarily look any better. […] But more importantly, Jeffery Lurie loves Carson. And I’m not saying whether he’s right or wrong, but the owner likes the quarterback. And I think Doug likes the quarterback, too. I don’t know what Doug thinks, if Doug plays a favorite with Carson, I don’t know if Jim Schwartz likes Carson, I don’t know if Howie likes Carson at this juncture – I don’t talk to this people, okay? But the owner likes Carson.

“And right now, if I’m the owner, I’m looking down and saying, ‘What happened to my MVP?’ Right? Because he was on an MVP track in 2017. He hasn’t looked the same. If it’s just injury, it’s just injury. But you also just paid him in 2019, a year and a half ago, you broke him off to be the quarterback of the future, and now you can’t get anything out of him? You see what I’m saying?

“Carson is absolutely to blame for his mistakes. He needs to fix them. He needs to be smarter with the football. He needs to be less stubborn. He knows that, I think, until he makes these mistakes. Until something clicks. Be more decisive. […] But something’s going on, whether it’s schematic, physical, or it’s just the personnel, where it’s a train wreck. You just paid him a year ago. So either acknowledge that you made a huge mistake, or that you’re not getting everything that you’re getting out of this quarterback.”

One thought on “‘CARSON’S TO BLAME FOR HIS MISTAKES,’ EX-EAGLE CHRIS LONG SAYS!”