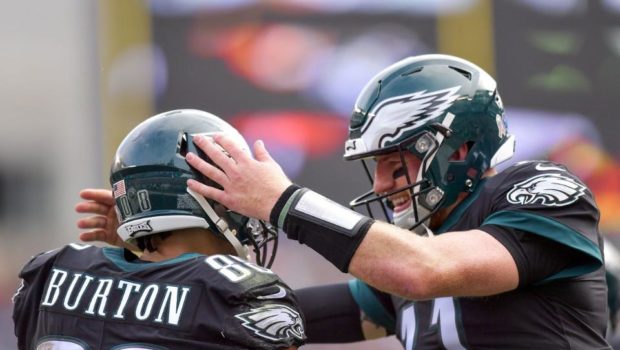 CARSON WENTZ HAS MADE THE EAGLES A RED-ZONE SURE THING!

Remember the days when the Eagles couldn’t score in the red zone to save themselves?

It wasn’t that long ago when the Birds would come up empty from within the opponents’ 20-yard line.

Or have to settle for a field goal.

The second-year QB has been at his best inside the opposition’s 20-yard line:

Wentz has completed 24 of 36 passes for 15 touchdowns and no interceptions in the red zone. The Eagles have no turnovers nor allowed any sacks down there and lead the NFL with a touchdown rate of 72.4 percent inside the 20, up from 49.1 percent last season.

”Any time you get down there, penalties, sacks and turnovers can really deflate teams. Those are things you definitely want to avoid,” Wentz said.

Wentz has also kept defenses off-balance — even players have scored red zone TDs in the first nine games. Coach Doug Pederson has designed plays that are tough to defend and hasn’t been afraid to try new ones.

”Carson is playing phenomenal down in that area,” offensive coordinator Frank Reich said. ”A lot of it is the quarterback play in that area as well that you can run the ball. And a lot of it is playcalling. I think Coach deserves a lot of credit for that, especially in the red zone of having the sense of the right play to call.

”Of course, being aggressive and going for it on fourth down gives you an extra play down there when you’re willing to take that risk and have your confidence in the players. I think Doug’s confidence in our players is beginning to show itself more and more in that area.”

In a 51-23 victory over Denver that sent he Eagles into a bye week with seven straight wins, Pederson opened up the playbook. Corey Clement ran for a score off an option pitch that began with Wentz in the pistol formation. There also was a TD pass to Clement on an inside screen that fooled Von Miller.

”Those are plays that you have to rep about two, three, four times a week and make sure you get that timing down,” Pederson said. ”Because you don’t just roll out of bed and run those plays. You have to work at it. The guys did a great job, great execution.”