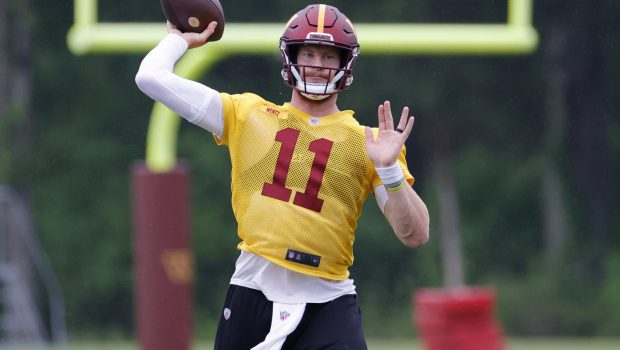 CARSON WENTZ IN DC: ‘HE’S GOT A CANNON, DUDE CAN SLING THE BALL’!

First the Eagles in 2016, then the Colts in 2021 and now the Washington Commanders

With a new QB1 in town and a slew of fresh faces on offense, Wentz quickly became the talk of the Commanders:

“He’s everything you want from your starting quarterback,” Jonathan Allen said “He’s a leader—talks to every guy on the team, not just the receivers or the running backs or the offensive line. Talks to the defensive guys, and he wants to be here and he wants to win. Really not much more I could ask for.”

When asked what specifically about Wentz as a pass-thrower stood out, Dotson got specific.

“How precise he is. When he says he wants you to be somewhere at this exact time, he means that. I’ll try to do that every single day.”

“I’m excited,” Curtis Samuel said. “He’s a guy that’ll do his thing. I think my job is to make everything easier for him—get open fast, make sure I’m on the spot and doing what I’m supposed to do.”

“First thing I know, he’s got a cannon. Dude can sling the ball,” linebacker Cole Holcomb said. “We got a lot of fast guys, a lot of fast receivers. I think we got a lot of good weapons and he’s gonna extend our offense in terms of the length of the field. It’ll help open up a lot of opportunities in the pass game for that deep ball.”