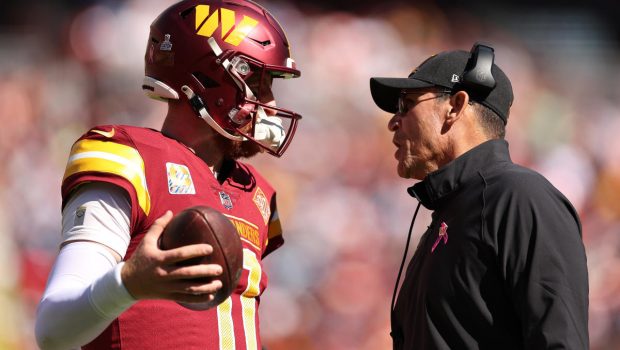 WENTZ CHOKES IT AWAY FOR COMMIES WITH PICK: LOOK FAMILIAR?

Washington may be the last stop on Carson Wentz’s NFL odyssey, as yesterday’s 21-17 loss to the Titans makes clear.

He was benched at the end of the 2020 season in Philly and forced a trade.

In Indy, he coughed up the last regular season chance to make the playoffs and was dealt to DC.

Yesterday, he played well enough to keep the Commies in the game against the Titans.

Until, as described by the Washington Post’s Candace Buckner:

Wentz is not a metronome, and by now we all realize what he can do.

He can be very, very good and launch bombs, as he did to Brown and Curtis Samuel.

On the other hand, he can be very, very frustrating, such as when he fumbled a snap on third and eight because he and the center weren’t on the same page.

Later, on another third-down play, after Wentz’s pass was tipped at the line, a faint chant of “Hein-ick-e! Hein-ick-e!” greeted the Commanders’ punt team.

Backup Taylor Heinicke never took the field, because as Wentz tends to do, he bounced back and marched the offense 87 yards in the closing seconds.

But at the Tennessee 2, with no timeouts, that potential game-winning — and season-resuscitating — drive ended when Wentz threw three passes off the mark.

His final one landed in the hands of a linebacker, instead of one of his receivers, and Wentz ended his day in the role of tackler.