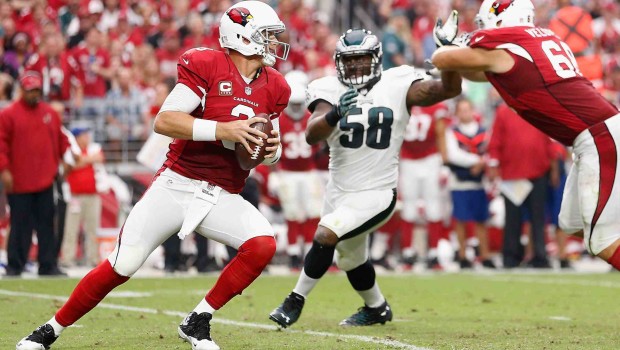 CARSON PALMER IS A SURE-BET QB FANTASY PICK AGAINST EAGLES!

If you’re looking for a sure-bet fantasy quarterback starter this week, you can’t do better than the Cards’ Carson Palmer, who is preparing to face the Eagles Sunday night at the Linc.

Palmer has put up an MVP-caliber campaign, completing 64.5 percent of his passes for 4,003 yards, 31 touchdowns and just nine interceptions. According to ESPN’s Total Quarterback Rating, which values quarterback on all play types on a 0-to-100 scale, Palmer is the best passer in the NFL (83.6 QBR) by a wide margin.

The game charters at Pro Football Focus agree, and have Palmer rated second to Tom Brady by the slimmest of margins (48.9 to 48.2), so it is safe to say he is going to be in your starting lineup for the playoffs. And you will be rewarded for your draft pick.

The Eagles enter this week allowing the third most fantasy points to the position (20.0) with six passers throwing for over 280 yards and multiple touchdowns. Matthew Stafford and rookie Jameis Winston each made five touchdown passes against Chip Kelly’s secondary, scoring 30 or more points for the week.

Palmer, meanwhile, has 20 or more points in five of his last six outings and should be able to take advantage of cornerback Byron Maxwell, who has a 97.9 passer rating against in primary coverage.