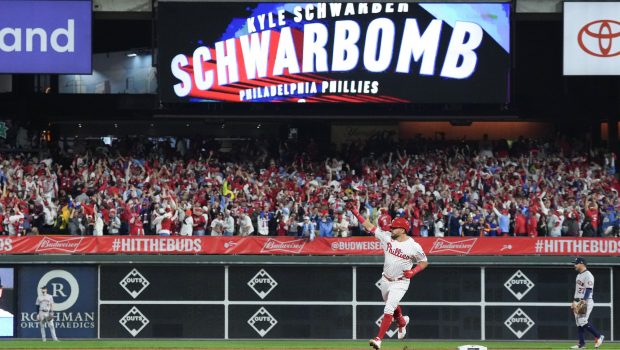 Playing in their 1st World Series game at Citizens Bank Park since 2009, the Phillies did not disappoint the sellout crowd, beating up on the Houston Astros 7-0.

Teams that win game 3 of the World Series win 69% of the time, a good outlook since the Phils have 2 games at home left to close the deal!

Behind solid pitching by Ranger Suarez, who tamed a tough Astros lineup through 5 innings getting his 1st ever Series win, the Phillies bullpen closed with shutout performances that stifled the Astros all night.

Bryce Harper led the Phils home run fest with a blast in the 1st inning giving the home team a 2-0 lead they only added on to.

Bombs by Alec Bohm, Brandon Marsh, Kyle Schwarber, and Rhys Hoskins added to the home run barrage the Astros got ambushed with in game 3 of the World Series that continues today and tomorrow at CBP.