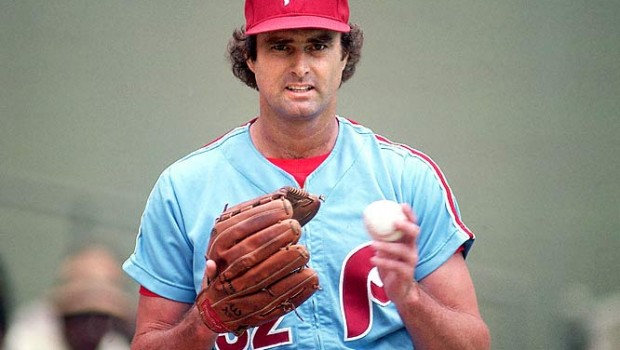 STEVE CARLTON PUTS HIS SERIES RING UP FOR SALE — HIS 1987 RING!

No one epitomized the Phillies’ rise from the ashes in the 1970s better than Steve Carlton.

So, very few people ever got to know him, and he has gone largely unnoticed in his retirement.

And most people don’t realize that he finished his stellar career with the Minnesota Twins, who won the 1987 World Series with Lefty as a member.

He pitched until he was 43, bounced around from team to team, from the Phillies to the Giants, White Sox, Indians and then the Twins. With the exception of a handful of starts for Chicago, he was toast for his last three seasons. There was literally nothing left in the future Hall of Famer’s tank.

But he pitched on. Since Carlton never spoke to the media we never got a great deal of insight as to why he pitched on, but he did. We don’t know if he needed the money. Or if he was worried he wouldn’t know what he’d do with himself after baseball.

Part of that late-career Carlton involved pitching in nine games — starting seven — for the 1987 Minnesota Twins. All of his games for them came after the rosters opened up in August. He pitched poorly: he had a 6.70 ERA, didn’t strike anyone out and walked too many guys. He was left off the postseason roster, seeing no action in the ALCS against the Tigers or the World Series against the Cardinals. But, as HardballTalk.com reports, he got a World Series ring with the Twins. And now you can buy it if you want to, as Lefty — or whoever the current owner happens to be — is auctioning it off.

Sure enough, the ring is now on SCP Auctions’ web site, set to open for bidding on April 8. It’s not clear if it is Carlton himself selling the ring and/or why it is for sale, but if you want a piece of history, start saving your money?

Why is he selling it? No idea. Maybe he cares little about it since he played almost no part in that championship season. Maybe he’s, quite understandably, much more attached to his 1967 or 1980 rings with the Cards and Phils. Maybe he doesn’t even own this ring anymore and it’s someone else selling it. Maybe he does need the money.

Carlton would come back to the Twins to start the 1988 season. He was done before the end of April. Next up: the Hall of Fame. Since then: we don’t hear much from him or about him, apart from some occasional story about his politics or unconventional view of the world or whatever. He was in a “Married: with Children” episode once. Since he’s not a broadcaster, team executive or team ambassador, we probably hear less about Carlton than we do any other inner-circle Hall of Famer of his generation. Since he was surly with the media, he has no one who covered him during his career carrying his water or telling his tales like so many other ex-players his age have.

All of which makes me wonder about this 1987 Twins World Series ring. A ring I’d bet that even a lot of Phillies and Carlton fans didn’t realize he had. And it makes me wonder what Carlton has done with himself over the past 30 years.