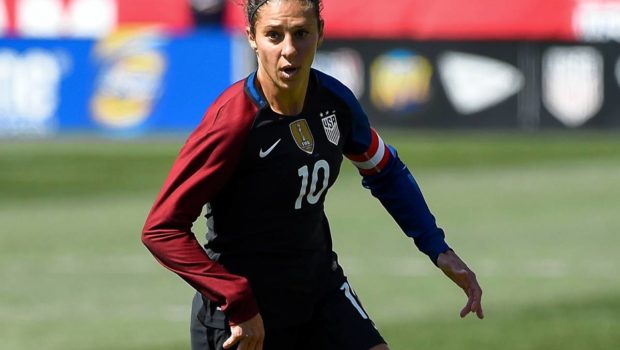 “If I liked coming off the bench there would be something wrong,” Carli Lloyd said. “That’s not my mindset.”

Tobin Heath, Rose Lavelle and Samantha Mewis also scored during Team USA’s second date in a three-match series leading up to the World Cup, which begins June 7 in France.

The U.S. faces Mexico on May 26 in Harrison, New Jersey, in its final tuneup.

Lloyd, the FIFA Women’s Player of the Year in 2015 and 2016, took her instant offense role to a new level, scoring on her first touch just 44 seconds after entering in the 60th minute. She converted a pass from Heath to push the lead to 3-0.

U.S. coach Jill Ellis prefers to use some younger, fresher legs in the starting lineup. But she said Lloyd is still the heart and soul of the team.

“Whether she’s a starter or coming in off the bench, she changes the game,” Ellis said. “She’s prepared and ready for everything. She’s proven that she’s ready for (big) moments

“She’s been kind of the core of this team for so many years,” Morgan said. “You know that she’s a gamer. I’m really excited for another World Cup because I know she’s going to be bringing it.”

Heath and Lavelle scored six minutes apart late in the first half.

Heath tipped in a cross from Megan Rapinoe in the 35th minute for a 1-0 lead. It was the 29th international goal for Heath, who scored twice in the SheBelieves Cup this year.

Lavelle converted a left-footed deflection off a pass from Lindsey Horan.

Heath’s goal came just three minutes after Naeher punched out a free kick from Anna Green just outside the box.

“I think the biggest thing was staying engaged with the back line,” Naeher said. “Even if I’m not visibly touching the ball, that communication keeps me in it.”

The Americans, who outshot New Zealand 25-1, scored three times in a 24-minute span in the second half and showed much more flair on offense.

“When they do the right things, it’s pretty fantastic,” Ellis said.

The United States has qualified for all eight World Cup tournaments and owns three championships after winning the 2015 event in Canada.

The Americans beat South Africa 3-0 in a tuneup on Sunday.

New Zealand will be making its fourth World Cup appearance and is still searching for its first victory.

“Our goal is to get that first win,” New Zealand coach Tom Sermanni said. “From there anything can happen.”

Team USA is in a group with Thailand, Chile and Sweden and will open June 11 against Thailand.