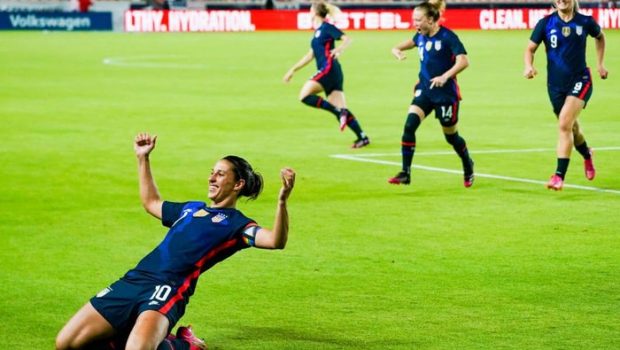 JERSEY’S OWN CARLI LLOYD IS OLDEST US WOMAN TO SCORE A GOAL!

Carli Lloyd became the oldest player to score for the United States women’s national team with an early goal in their 4-0 win against Jamaica on Sunday night.

Just 23 seconds into the game, Lloyd received a pass from Rose Lavelle inside the box. She kicked the curling ball into the corner of the net for the early lead in the friendly, which is part of the 2021 Women’s National Team Summer Series.

Goals from Lindsey Horan and Margaret Purce gave the USWNT a 3-0 lead at the half, and Alex Morgan finished it off by netting one in the 91st minute for the victory.

Lavelle went down in the 32nd minute and walked off on her own alongside the U.S. training staff, minutes after she had gone down but gotten back up under her own power. She returned to the sideline in the second half walking on her own but out of uniform.

After the game, USWNT coach Vlatko Andonovski said Lavelle “rolled her ankle slightly” and that it was her decision to come out of the game.

At 38 years and 332 days old, Lloyd took over a record previously held by Kristine Lilly. Her goal was also the second-fastest in USWNT history.

In April, Lloyd became the third player in the history of men’s and women’s international soccer to earn her 300th cap in the USWNT’s 1-1 draw against Sweden.