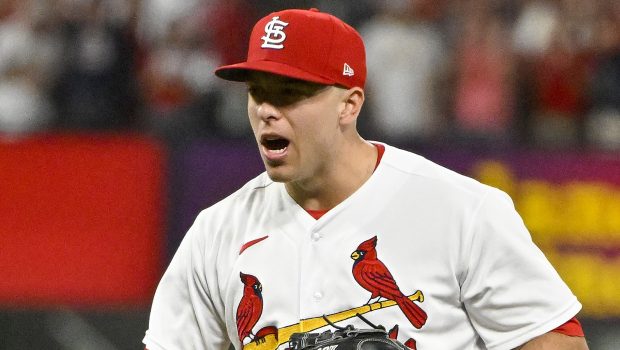 A fight for love and glory.

But at Busch Stadium yesterday as the Cards ace reliever Ryan Helsley melted down before our eyes and he was allowed to pitch even though he couldn’t find the plate.

With two outs to get and a two-run lead to save in the first game of the playoffs Friday against the Phils, All-Star Ryan Helsley lost the feel for his pitches.

The middle finger injured three days earlier stiffened on him during the ninth inning, leading to two walks and, with the bases loaded, a hit batter.

Before the Cardinals moved to replace Helsley the game came apart.

The Phillies scored six runs in the ninth to beat the Cardinals, 6-3, in Game 1 of the best-of-three wild-card series. They can end the Cardinals’ season with a win tonight.

The Cardinals will be without Helsley to close if they have a chance to hold off elimination as the right-hander left the ballpark for a battery of exams on his finger late Friday.

“He’s been super-reliable all year,” manager Oliver Marmol said. “Obviously, we’re aware of the issue with the finger. It wasn’t an issue early on. Didn’t show any signs of it. Once you go back-to-back walks, you’re thinking this is the last hitter. And hit by pitch definitely ends it.”

The Phillies’ comeback was just getting started.

Helsley’s 101-mph bruise to Alec Bohm forced home the Phillies’ first run in the playoffs since 2011, and still the Cardinals had the lead, two outs away from control of the series. What followed was an uncharacteristic and sketchy inning that featured two Gold Glove winners trying to force plays and a debatable infield positioning that cost runs. For the first time in 94 playoff games when they’ve had at least a two-run lead in the ninth, the Cardinals lost. The unraveling of one inning was a stark contrast to the crisp, brisk, scoreless work by starter Jose Quintana that carried the Cardinals until Juan Yepez’s homer gave them a 2-0 lead going into the disastrous ninth inning.

“And we didn’t take care of business,” third baseman Nolan Arenado said. “We just needed two more outs and we couldn’t do it.”

Helsley jammed the middle finger on his right hand into the ground Tuesday night trying to regain his balance against Pittsburgh. The finger remained tender and its range of motion limited for two days, but when Helsley tested it Thursday he was encouraged. He was able to apply pressure to the ball, especially with fastballs. He breezed through his first two outs, finishing the eighth inning. He struck out two of the first three batters he faced and did not lack for velocity. His command went sideways.