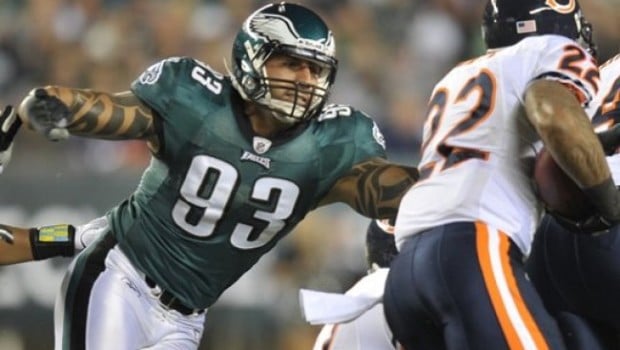 The Arizona Cardinals have signed yet another long in the tooth pass rusher:

After placing outside linebacker Alex Okafor on injured reserve today, the Cards added 35-year-old Jason Babin. Babin worked out earlier this week along with Matt Shaughnessy.

Babin has been in the league for 14 years — three with the Eagles.

Over the past three, he still managed a respectable level of production given his situational usage and age. In two seasons with the Jaguars and Jets between 2013 and 2014, Babin had 9.5 sacks, 46 tackles and three forced fumbles. He appeared in two games with the Baltimore Ravens this season, but was cut after less than a month with the club.

A situation could arise where Babin is playing alongside fellow veteran sack master Dwight Freeney, who has already racked up eight sacks this year in a niche role that required just 264 snaps over the course of this season.

Okafor had a far more consistent role, which means responsibilities could be blanketed across the board. Babin played a little less than half of the Jets’ total defensive snaps a year ago, and graded out among one of the best rush linebackers.

Had this move been done in New England, it would be praised as brilliantly Belichickian, but then again, we’re starting to give Bruce Arians credit on a similar level. Can adding another vet like Babin push the Cardinals over the edge on defense?

Green Bay could have struggled against Washington’s pass rush last weekend had the Redskins kept their foot on the gas. They logged a safety early on when Mike McCarthy opted to leave his offensive tackles on an island. It wasn’t until Aaron Rodgers managed to create offense out of larger sets with more blockers that the Packers could revert to their prototypical speed.