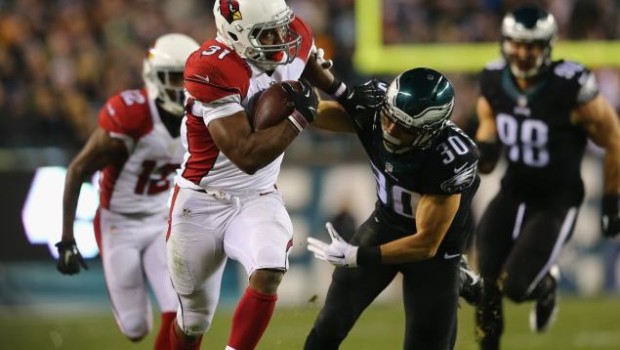 CARDS SHOWED EAGLES WHAT A TRULY GREAT TEAM LOOKS LIKE!

After getting torched by the Arizona Cardinals 40-17, the Eagles now know what a real Super Bowl contender looks like up close and personal!

The Birds hung tough with the Cards for 30 minutes, then the floodgates opened, no more emblematic than the 47-yard run for a touchdown by Cards RB David Johnson (above) at the end of the first half.

More than six different Eagle defenders had their hands on Johnson, but couldn’t get him to the ground. It was eerily reminiscent of the Bucs and Lions games when similarly horsemeat tackling was on display, with the same losing results.

Johnson finished the game with 187 yards rushing, with 3 touchdowns.

Cards QB Carson Palmer got whatever he wanted on the Eagles pass defense, carving them up for 274 yards and a TD.

Again, the Eagles offense couldn’t continue drives, losing the time of possession battle once again, 37:28-to-22:32, keeping an Eagles defense on the field, giving them longer, and more opportunity to get abused.

But let’s be real:

The Cardinals are superior in all 3 phases of football, and it showed the whole second half.

Luckily for the Birds, the final two games on the schedule are against teams of their speed, and are beatable. With victories over the Redskins and Giants, the Eagles will win the NFC East with a record of 8-8.

The Redskins will visit the Linc Saturday Night, December 26th at 8:25pm/NFLN