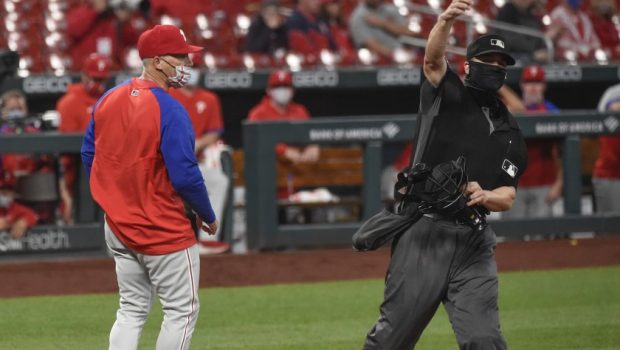 By Sam Bush and MLB.com

Tensions were running high as Phillies manager Joe Girardi was ejected after Didi Gregorius got hit after Bryce Harper’s facial.

Both benches were given a warning, but Girardi argued with home plate umpire Chris Segal that Cabrera shouldn’t face another batter. And Cards manager Mike Schildt barked at Girardi.

“I understand why they give the warnings, right,” Girardi said. “They don’t want things to escalate. They don’t want people to get hit. But if a guy hits a guy in the face and a guy in the ribs with two pitches, he’s got to go, right? If you’re really protecting the players, obviously he doesn’t have command. He’s got to go. … I mean, now I got a shortstop that probably might have to have imaging on his ribs. And you’re going to let him stay in the game. He’s got to go. Just for the safety of the players.”

Ricky Bo and John Kruk respond to the Cardinals in the aftermath of Bryce Harper and Didi Gregorius getting hit by a pitch: pic.twitter.com/I0iBym99Uf