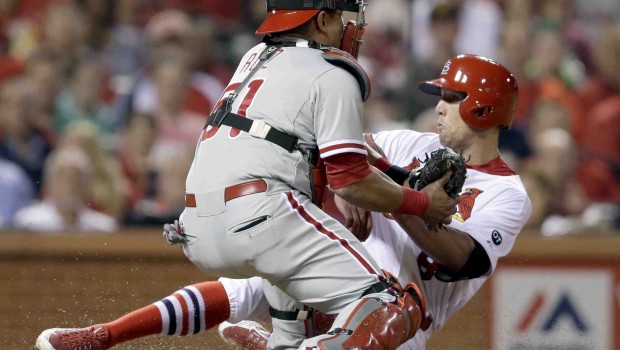 Peter Bourjos beat the throw and the tag from Phillies catcher Carlos Ruiz to hand the Cardinals a 3-2 lead.

The Phillies’ right-hander’s final start of the month Wednesday was spoiled by one inning in a 5-2 loss to the St. Louis Cardinals at Busch Stadium.

He allowed four earned runs in 26 1/3 innings in his first four starts this month, but he allowed five runs in six innings as the Cardinals try to win the four-game series with a victory Thursday.

“They’re a good ballclub,” Harang said. “They’ve kind of got everything over there. When they put it together they can make things happen.”

Harang actually looked like himself through four innings, allowing a run in the second inning as the Phillies had a 2-1 lead.

But trouble came in the fifth. Kolten Wong stood on second base with one out when Peter Bourjos tripled to right field to tie the game. Matt Carpenter followed with a ground ball to Phillies first baseman Ryan Howard.

Howard threw home, trying to nail the speedy Bourjos. But Bourjos beat the throw and the tag from Phillies catcher Carlos Ruiz to hand the Cardinals a 3-2 lead.

“He’s pretty quick,” Howard said about Bourjos. “It was one of those bang-bang plays and it was actually a lot closer than I thought it was on the replay, because it looked like his foot was still in the air when they showed the other angle.”