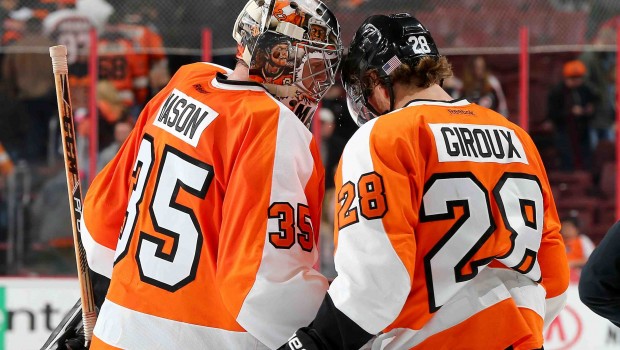 The Flyers captain played up to his title last night.

Claude Giroux had two goals and an assist and the Flyers held off the Colorado Avalanche 4-3 Saturday night at the Wells Fargo Center for their third straight win.

Wayne Simmonds and Brayden Schenn also scored for the Flyers, and Jakub Voracek added three assists to his league-leading total to help Philadelphia win its fifth straight at home. Steve Mason stopped 36 shots to hang on for his third consecutive win.

Trailing 4-0 after two periods, Colorado got goals from Maxime Talbot, Alex Tanguay and Zach Redmond in the third period.

”It’s good to get a win,” Voracek said, ”but that’s not the way we want to play in the third.”

Philly’s penalty-kill unit fended off a furious attack by Colorado, following defenseman Braydon Coburn’s holding penalty at 2:49 of the third period, after which Flyers coach Craig Berube called a timeout.

Berube said he didn’t have any inspirational words of wisdom to share with his players.

”In the timeout, I said, ‘Listen, you’ve got to start playing. It’s nothing more than that. I can’t sit here and draw up a play for you guys to get out of it. Just play,”’ Berube said. ”It’s not even that they stopped playing. It’s an attack mentality. You stop skating. That’s the biggest thing. Skate and work, no matter what the score is. It gets you out of trouble.”

Reto Berra stopped 23 of 27 shots as the Avalanche lost their sixth straight on the road.

Philly reconfigured its top line earlier this week by moving Simmonds, the right-winger with a right-handed shot, to the left side for the first time in his career. Berube said he was looking for ”chemistry.” The result: Three goals in a span of 11 minutes, 27 seconds from the top line.