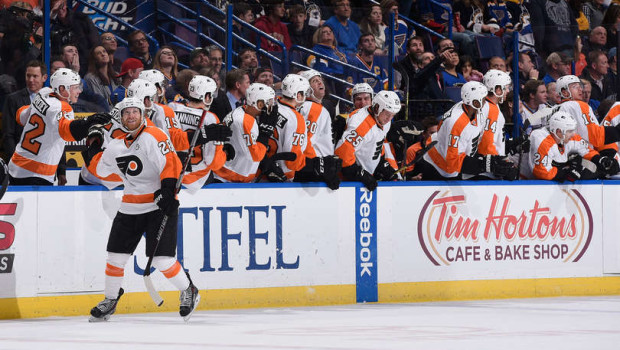 Giroux’s 11th goal of the season capped the Flyers’ three-goal second period and the Flyers beat the Blues 4-2 for their fourth straight road win.

Giroux made it 3-1 with by blowing past two St. Louis defenders and scoring with a forehand-to-backhand deke. He finished with a goal and two assists.

”It was a nice goal,” Giroux said. ”To be honest, I don’t really remember what happened, but we were up 2-1 there and we wanted that third goal. I was pretty happy.”

Michael Raffl and Matt Read also scored in the second and Ryan Whiteadded an empty-net goal to help the Flyers snap a two-game skid.Michal Neuvirth made 35 saves.

”What I see tonight is we had good goaltending, we had a good four-line effort, all six defensemen did a good job,” coach Dave Hakstol said. ”… It’s a tough place to win and it’s a good team win for us.”

Robby Fabbri andDavid Backes scored and Brian Elliott made 25 saves for the Blues. St. Louis has lost four of five games in December.

After Fabbri opened the scoring 1:35 into the second period, the Flyers responded with three consecutive goals.

Raffl scored just 2:20 after Fabbri when he tipped in a centering pass from Brayden Schenn for his third of the season and first goal in 11 games. Giroux also picked up an assist on the goal.

Read scored his fifth at 6:39 when he collected a rebound of a long shot fromMichael Del Zotto and was able to wrap it around Elliott while falling to the ice. Wayne Simmonds’ secondary assist was his 100th assist with the Flyers and 300th career point.

Giroux scored with 1:54 remaining in the second when he skated around Magnus Paajarvi and faked out Elliott. Schenn and Nick Schultz assisted on the goal.

”That’s pretty amazing to watch him put it under the D-man’s stick and was able to make the deke at full speed,” Schenn said. ”That’s a nice goal and I’m sure you’ll see that one on the highlight reel many times.”

Fabbri scored his fifth goal after he was left alone in the slot. Dmitrij Jaskin found the rookie forward with a centering pass from behind the net.

Backes scored on the Blues’ first power play of the game, 7:37 into the third period, after Simmonds went off for hooking. Backes redirected a shot from Alexander Steen and then slipped the rebound past Neuvirth for his eighth of the season.