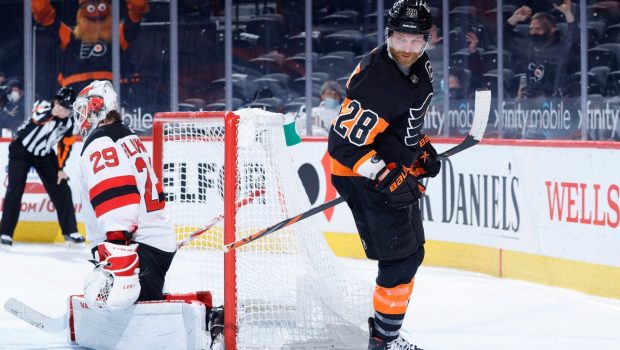 Claude Giroux scored twice in 22 seconds to force overtime and he also scored in a shootout as the Flyers beat the New Jersey Devils 4-3, who have gone 10 straight games without a win.

Giroux and Sean Couturier scored in regulation for the Flyers. Brian Elliott had 29 saves.

Giroux scored quickly when the Flyers were in desperation mode with under 90 seconds to play and down by two goals. He finished a James van Riemsdyk pass for his 12th goal of the season at 18:34 to cut New Jersey’s lead to 3-2. The tandem then connected just 22 seconds later on a similar play, beating Blackwood to the glove side.

New Jersey had the jump on the play early in the game, taking advantage of a leaky Flyers defense to get several quality scoring chances.

McLeod capitalized on an odd-man rush, taking a feed from Nathan Bastian on the left side of the crease and beating Elliott for his eighth goal of the seasosn just 4:56 into the first period.

The Flyers tied it on Couturier’s 14th goal of the season. He tipped a shot from the point by Phillipe Myers past Blackwood.

The Devils took the lead midway through the second period when Bastian — falling to the ice with two Flyers defenders around him — threaded the needle to Miles Wood, who had scored his 16th into a yawning net.

Zacha added his 11th goal when he beat Elliott to the glove side after receiving a backhand pass from Jesper Bratt that appeared to be a critical insurance goal for New Jersey.

New Jersey had a 4-on-3 power play in overtime after Ivan Provorov was whistled for tripping, but mustered only one shot against Elliott.

The shootout reached six rounds and was decided when Kevin Hayes’ backhand slid past Blackwood. Elliott had just enough glove on Nico Hischier’s shot to keep it from crossing the goal line.