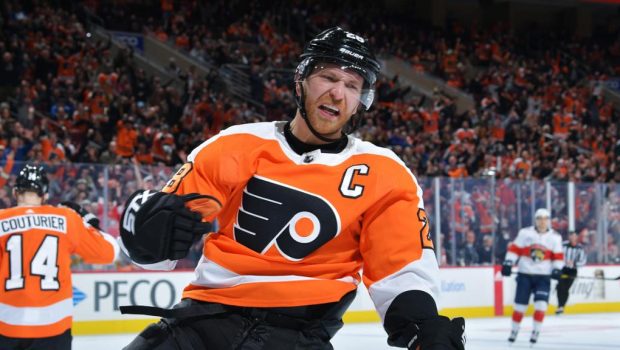 Claude Giroux had two goals and an assist, Calvin Pickard stopped 35 shots and the Flyers beat the Arizona Coyotes 5-2.

The Flyers ended their West Coast trip at 3-0-1.

“Tonight for sure wasn’t our prettiest game, but we found a way to win,” coach Dave Hakstol said. “There’s a lot of strengths that we like out of this road trip and there’s a lot of areas we can look at and try to improve as well.”

Pickard made his second straight start after Michael Neuvirth was placed on injured reserve and Brian Elliott was injured in a collision with teammate Travis Konecny during practice Sunday.

Pickard was sharp most of the night, giving up Alex Galchenyuk’s power-play goal in the second period and Michael Grabner’s goal late in the third after giving up four goals in an overtime loss to San Jose on Sunday.

“It’s good to get in a rhythm for sure,” Picard said after his fifth start of the season. “I’m starting to get more comfortable and I thought the last two were my best two so far.”

The Coyotes went on a scoring binge during their win streak, outscoring opponents 24-7 over five games, including four straight games with at least three goals in the first period.

The Flyeers had the jump early, scoring midway through the first on a shot by Giroux from the blue line that goalie Darcy Kuemper had trouble seeing through traffic.

Gostisbehere scored from near the same spot on a power play late in the period on a shot that caromed off Arizona center Derek Stepan’s stick past Kuemper.

“It was a tough bounce,” Kuemper said. “Everyone’s trying to do the right thing and it kind of takes a weird deflection, but what can you do? You just have to keep working and get back into it.”

The Coyotes did 64 seconds into the second period on a power play, when Galchenyuk wristed a shot from the right circle past Pickard, who was screened by Christian Fischer.

Couturier put Philly back up two goals, shooting into an open net from the right circle after Grabner collided with Kuemper and knocked him out of the crease.

Giroux put the game out of reach with his sixth goal of the season in the third period, using a deke to beat Kuemper after a feed from Wayne Simmonds.

“We’re happy about our road trip here, but we can’t be satisfied,” Lindblom said. “We have to come home and have a good stretch and build on this road trip, keep climbing in the standings.”