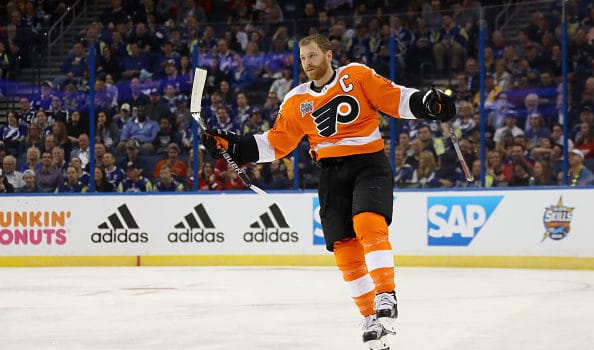 “It means I’m getting old,” Claude Giroux told NHL.com when asked about his rise in Flyers stats history.

The Flyers captain said that as he laughed but he is keenly aware of his place in the team’s history:

“It’s something I’ll probably think about someday. It’s a big honor because there have been a lot of great players here. But, to be honest, I don’t think about those things now. I only know about it when you [media] guys tell me.”

Entering opening night in Vegas, Giroux was tied with Hockey Hall of Fame left winger Bill Barber — who, like Giroux, spent his entire playing career in Philly — for third on the all-time assist list in Flyers history.

In the second period of the Flyers’ 5-2 win, Giroux started a tic-tac-toe passing sequence that resulted in a power play goal for the Flyers. Giroux’s 464th career assist put him in sole possession of third place on the Flyers’ all-time chart.

Next up: Giroux is now 16 assists away from equaling Flyers Hall of Fame left winger Brian Propp (480) for 2nd.

All-time franchise leader Bobby Clarke’s 852 regular season assists are likely unattainable for Giroux. However, Giroux has hit the 50-assist mark four times in his career (and 65+ twice, including his career-high 68 last season). If he can continue to play at a high level for another four seasons, Giroux could eventually reach 700+ assists for his career.

If Giroux averages 70 points for the next three seasons, he will pass Barber for 2nd on the all-time points list late in the 2020-21 season.

Although Giroux has never been a prolific goal-scorer (his 34 goals in 2017-18 surpassed his twice-achieved previous single season high by six goals), he is a six-time 20+ goal scorer. His 214 career regular season goals rank 13th in franchise history.

Giroux needs 21 goals this season to match Flyers Hall of Fame member Rod Brind’Amour (235) and move into the top 10. Before he hits that milestone, he will pass Rick Tocchet (232) and Hockey Hall of Famer Mark Recchi (also 232 as a Flyer).

Giroux’s unproductive 2016 (one assist in six games) and relatively unproductive 2018 (one goal, two assists in six games) playoff runs pushed him below a point-per-game in his playoff career but he is still in the franchise top seven in that category at .942 points-per-game. Giroux’s career playoff points-per-game is actually higher than Clarke’s (.875) or Barber’s (.837).

The Flyers top seven playoff point-per-game players (excluding Peter Forsberg who had eight points in six games in his lone Flyers playoff series) is as follows: