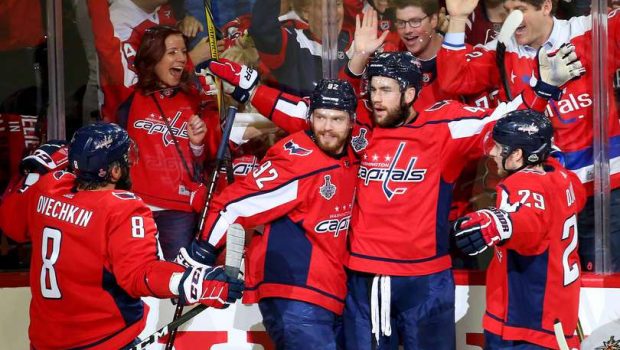 CAPS WIN AND TAKE KNIGHTS TO THE 3-1 STANLEY CUP BRINK!

When the puck drops in Las Vegas on Thursday night, the Capitals will have a three-games-to-one lead over the Vegas Golden Knights in the Stanley Cup finals.

That will be in part because they demolished the Knights, 6-2, in Game 4 last night at Capital One Arena, where the only thing more astonishing than the Capitals’ absolute undressing of Vegas was the scene in the packed streets outside.

What town do we live in again? Apparently, one in which thousands of fans without tickets jam the areas around the arena just so they can feel what it’s like, so they can hug, so they can be filled with joy and anticipation — not dread.

The reality is this: It was simply an extension of this series — and these playoffs. The Capitals are better than the Golden Knights, just as they were better than Columbus and Pittsburgh and Tampa Bay.

We now have four games of evidence in the finals, and while the fight’s not over — far from it — it’s a fair assessment. There was a weird Game 1 in which both teams looked shaky. And there have been three games since in which the cumulative score is Washington 12, Vegas 5.

And yet, was Monday’s version even best hockey?

“I think we have another level,” said forward Devante Smith-Pelly, one of six different Washington goal scorers.

Think about that, and believe it, because it’s true. The last month has so turned Washington’s sporting reality around that the District can rise, blink its eyes, come to terms with the three-games-to-one lead — and embrace it. Enjoy prosperity. Roll around in it.

Yes, we know this is a franchise that has blown five three-games-to-one leads in postseason past, and yes, that’s a staggering number: