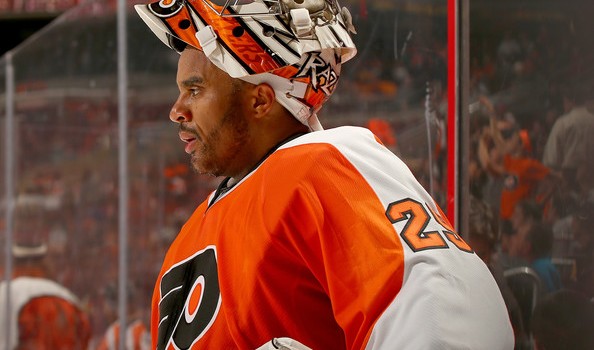 CAPS’ RECORD AND ATTITUDE A CHALLENGE FOR FLYERS TONIGHT

With Steve Mason ailing, Ray Emery (above) will likely be in goal.

The Flyers faithful exulted the other night when their faves knocked off Ottawa to snap a five-game winning streak and record their first shootout victory of the season.

Now, the Flyers face an elite NHL team Thursday night at the Wells.

The Capitals head to Philadelphia on Thursday night seeking a season-best fourth straight win, while the Flyers try to continue making up for the latest of their crippling losing streaks.

The Capitals (21-11-7) won 6-2 in Toronto on Wednesday, but the success goes back much farther. Washington has scored 3.33 goals per game over an 11-1-3 span, but coach Barry Trotz wasn’t thrilled with the most recent effort.

“I thought we were pretty slow out of the gates,” Trotz said. “I thought as the game went on we played more to our identity than we did early in the game.”

Washington has dropped eight of 11 against Philly, including the last three with 16 goals allowed.

The Flyers began a four-game homestand with Tuesday’s 2-1 shootout win over Ottawa, ending a five-game losing streak. It was their fourth skid of at least four games, so it’s no wonder why Craig Berube’s team finds itself in 13th in the East as it enters the final game of its first-half schedule.

“I think that’s going to define our season,” said Wayne Simmonds, who scored the shootout winner.

Whether the team remains intact might depend on a substantial turnaround. General manager Ron Hextall has placed the onus on the players and hinted at change should things not improve.

“It’s whatever Hexy wants to do, Hexy does,” Simmonds said. “He’s the GM. It’s not for us players to really think about. We’ve got to get on the ice and make sure we do our jobs or else we obviously start hearing things like that.”

Scoring has been a concern lately with 10 goals over the last six games. Simmonds also scored a power-play goal Tuesday after totaling a point in his previous five games.

Ray Emery could be in goal for the Flyers since Steve Mason underwent an MRI Wednesday after leaving practice with an undisclosed injury. The results haven’t been announced, but after the MRI it was revealed Mason would still participate in Thursday morning’s skate.