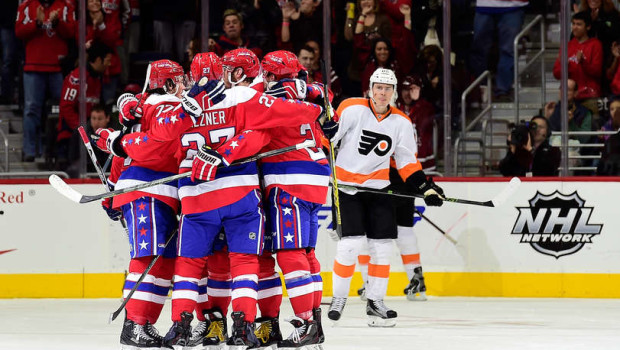 The loss kept the Flyers stuck four points out of the playoffs.

Even Matt Niskanen was stunned by his game-winning goal in a 3-2 win over the Flyers yesterday, admittedly forgetting what happened once he got over the red line.

In a Washington Capitals locker room full of personalities, Niskanen is one of its more reserved members, and his steady play on the ice has rarely produced anything worthy of a highlight reel.

“I don’t have many moves,” Niskanen deadpanned. “That was an accident.”

The win was Washington’s third straight over a Metropolitan Division foe, and it improved the Capitals’ league-leading record to 38-9-4 with 80 points.

Flyers defensemen Shayne Gostisbehere and Michael Del Zotto were out of position, lunging with their sticks as Niskanen dangled the puck through them. Niskanen kept skating toward the net, flipping the puck under goaltender Steve Mason’s armpit and hopping across the crease after his release.

With the Capitals down a goal, Tom Wilson was called for interference in the offensive zone halfway through the second period. Washington had the momentum to that point, outshooting the Flyers 10-3 in the first 10 minutes of the period. A poor change on the penalty kill led to a penalty for too many men on the ice, putting the Capitals down two players for 53 seconds.

The game turned after Washington killed off those penalties. The Capitals’ special teams have stumbled recently. The power play entered the game 0 for its last 15, and the penalty kill had allowed five goals in the last five games, uncharacteristically leaky. With the power play continuing to struggle — 0 for 2 on Sunday — Niskanen said the penalty kill felt a greater urgency. Niskanen leads the team in time on ice per game and shorthanded time on ice per game and is second in blocked shots.

“If you’re minus more than one on the special teams, that really hurts you,” Niskanen said. “We haven’t been finding the back of the net on the power play, but the penalty kill has been pretty good.”

The Capitals used the defensive momentum to spark their offense, first with an Ovechkin deflection off an Alzner shot from the point with 4:04 left in the second period. That tied the game, and before Ovechkin’s 30th goal of the season could even be announced the second line was cycling in the offensive zone, an extended shift that had an inevitable feeling to it.

From the bench, Trotz noticed that Flyers forward Brayden Schenn was using a broken stick, his bottom hand holding it together. The bench started yelling to get the puck to Dmitry Orlov so he could take advantage in a one-on-one situation. Orlov skated around Schenn and then another defender, firing from the left faceoff circle for a 2-1 Capitals lead 1:09 after Ovechkin’s goal.

The Flyers recovered with a goal in the first minute of the third period, but then Washington finished the game as it has so often this season. Goaltender Braden Holtby was a wall for the rest of the game, finishing with 33 saves, and then an unexpected source delivered an unexpected goal.

“He was flying, and kind of just a parting of the seas there,” Holtby said of Niskanen’s winning play. “He had a lane to go right through. I think he looked even surprised, and then he kept going. He put a good finish on it. That’s a huge goal from a guy that’s known for his defense, and that goes to show you we’ve got different guys stepping up every night.”