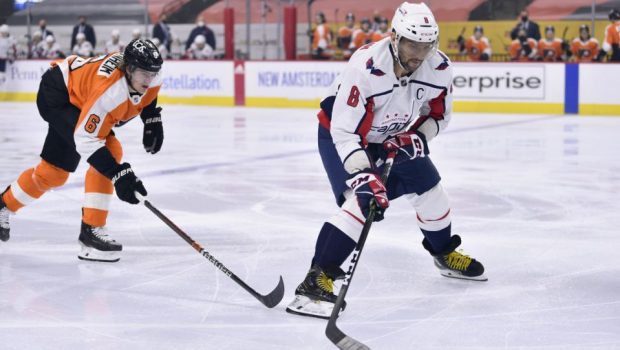 CAPS OVECHKIN MOVES UP AND FLYERS COME IN A SLOPPY SECOND!

Alex Ovechkin continued his move up the NHL career goals list to 715 and the visiting Capitals won their third straight, 5-3 over the Flyers.

Ovechkin moved two goals shy of matching Phil Esposito (717) for sixth on the goals list. He scored his fourth goal against the Flyers in just three games this season. The three-time MVP has 38 goals in 60 career games against the Flyers.

Conor Sheary, John Carlson and Dowd scored three straight goals to build a 4-1 cushion and help the Capitals win for the seventh time in the last eight games. Nic Dowd scored an empty-netter off a short pass from Samsonov in the final seconds.

Travis Konecny scored his seventh goal of the season, and Ivan Provorov and Scott Laughton also scored for the Flyers.

Brian Elliott got the start in net for the Flyers in place of slumping Carter Hart. The 35-year-old Elliott has been reliable when needed in his four seasons with the Flyers and already had two shutouts in eight starts this season.

The Caps and Flyers finish their two-game Philly set on Saturday.

“There’s no doubt we have to be better,” Flyers coach Alain Vigneault said. “That’s on me to have them prepared and know what to expect. We need to do a better job next game and players have to get themselves ready to execute and compete.”

The Flyers played a sloppy first period and committed seven turnovers. Sheary took advantage of one on the blue line and was left all alone against Elliott. Sheary’s shot trickled into the net for his sixth goal and a 2-1 lead.

Carlson made it 3-1 in the second when he again went 1-on-1 with Elliott and scored his sixth of the year for his 500th career point.

“I’ve been fortunate to have some great layers around me for my entire career,” Carlson said.

Dowd got a lucky break — or skate — on his fourth goal. He lost control of the puck and Flyers defenseman Shayne Gostisbehere kicked it into the net.

“I was kind of shrugging in the pile there,” Dowd said. “I’ll take it.”

There was an odd pause at the end of the second period when glass was shattered by a puck from Provorov, forcing the teams to head into intermission with 1:29 left on the clock.

Provorov made it 4-2 and Laughton fired a slapper past Ilya Samsonov with 9:02 left to cut it to 4-3. Samsonov made the lead stand the rest of the way and the Caps won in Philly for the fifth time in the last six games.

“We all know in the locker room what we need to do as a team and individually better,” Konency said. “We need to focus on winning games and not on anybody else.”