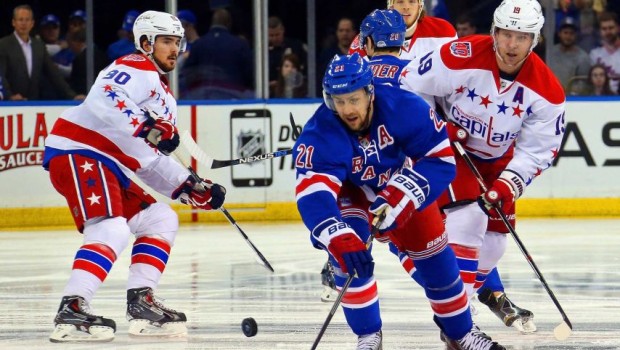 FOR CAPS, NEW LOOK BUT SAME RESULT AGAINST RANGERS

Braden Holtby lay there, first on his back, and then he did a slow roll over on his stomach, and crouched over the ice like he was sick. Like he was in the grip of a wave of nausea. The pose captured everything. It said the Washington Capitals had done all they could, retched up everything in their guts, gone seven games plus overtime against the New York Rangers, and what was left was Holtby’s bereft, motionless frame on the ice, while the siren went off and Madison Square Garden exploded in triumphant, towel-waving movement.

It was yet another second-round playoff loss, another maddening Game 7 loss to the Rangers. But this one was different somehow. When you go down in overtime to the top seed and the great goalie Henrik Lundqvist this way, on that pickaxe of a rebound shot that came right to Derek Stepan’s stick at 8 minutes 36 seconds of overtime (photo above), with Holtby spread-eagled desperately across the mouth of the goal, kicking his arms and legs for all he was worth, there is surely no disgrace.

The Capitals have had other terrible defeats, but they were heartless ones that made the franchise re-evaluate everything. This was an altogether different look and feel. Until the very last second they had looked plenty good enough to make the Eastern Conference finals, a well-built, fighting team.

Throughout this epic of a series, there was a sense that this Caps team had a different quality, more dash, than their predecessors. Whether it was Brooks Orpik putting some muscle into them, or Alex Ovechkin and Evgeny Kuznetsov’s loose, surging danger, they carried that sense of possibility into the last minute of every game. This was a team that loved to skate, loved to show their flair, and who fought so hard with their sticks it sounded like fence boards clapping together. “You’re excited,” Coach Barry Trotz had said after the morning skate. “You’re alive. You’ve got a little bit of nervous energy. But it’s a good energy.”