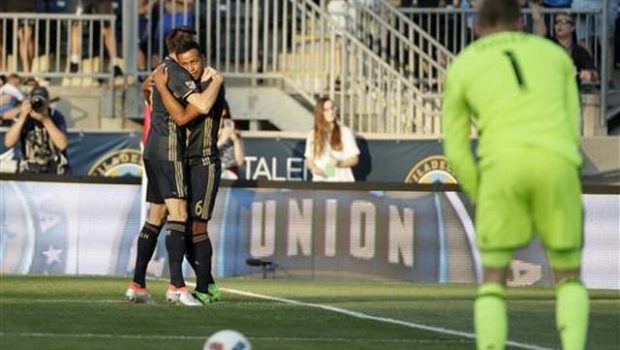 Nothing lasts forever, not even the Union’s spotless record at their home in Chester.

And last night Andrew Jacobson, Kekuta Manneh and Christian Bolanos scored and the Vancouver Whitecaps handed the Union their first home loss of the season 3-2.

Bolanos had the key goal in the 84th minute, with Chris Pontius scoring the final goal for Union late in stoppage time. Bolanos took a pass from Erik Hurtado near the top left corner of the 18 box, made a move and right-footed a shot through the legs of defender Keegan Rosenberry for his fifth goal. The ball, which may have deflected off Rosenberry, slipped just inside the left post.

The Union (7-5-5), who were 6-0-2 at home and lead the Eastern Conference, opened the scoring in the 14th minute. Fabian Herbers’ shot from 15 yards hit the crossbar and Sebastien Le Toux chested the rebound to Roland Alberg for his fifth goal (above).

Jacobson tied it five minutes later, heading in Bolanos’ corner kick that went through the hands of goalkeeper Andre Blake.

Vancouver (7-7-3) made it 2-1 a long counter by Kekuta Manneh, who long run, deked two defenders and sent a right-footed shot from just outside the 18 that deflected in off the right cross bar.