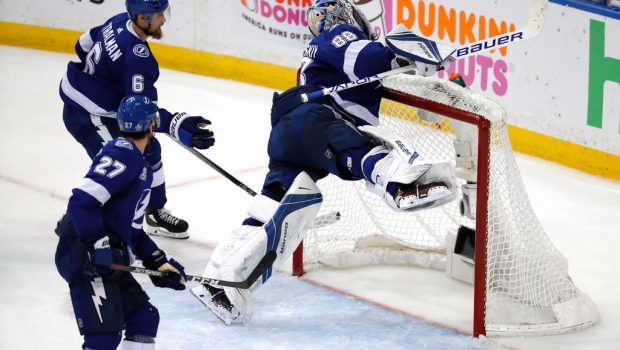 CRATERING CAPS ON CUP ELIMINATION BRINK AFTER 3-2 LOSS TO LIGHTNING!

Just when Washington Capitals fans thought it was safe to watch the Stanley Cup playoffs:

Cedric Paquette scored in the opening minute and Andrei Vasilevskiy stopped 28 shots to help the Tampa Bay Lightning hold off the visiting Caps, 3-2, in Game 5 of the Eastern Conference finals.

The Capitals, in the conference final for the first time in the Alex Ovechkin era, have lost three straight games after winning twice on the road to begin the series.

Ondrej Palat and Ryan Callahan also scored as the home team won for the first time in the best-of-seven matchup, with the Lightning taking a series lead of three games to two and moving within one victory of advancing the Stanley Cup finals for the second time in four seasons.

Ovechkin scored with one minute 36 seconds remaining, trimming what once was a three-goal lead to one, however Vasiliveskiy made three more saves down the stretch to finish the victory.

Game 6 is Monday night in Washington. Tampa Bay is 5-1 on the road this postseason.

The Capitals took their first two wins of the series by scoring 10 goals on Vasilevskiy, a Vezina Trophy finalist, to send the Lightning — who had the best record in the East during the regular season — into desperation mode.

Tampa Bay responded by winning Game 3 in Washington, then evened the series despite being outshot and outplayed for sizable stretches of a 4-2 victory in Game 4. Then they returned home, where Coach Jon Cooper was confident his Lightning would do better than in the first two games.

It turns out Cooper was right.

Washington’s Dmitry Orlov turned the puck over in the neutral zone on the opening shift of the night, and Callahan made the Caps pay for the mistake, feeding Paquette for a 1-0 lead just 19 seconds into the game.

Palat’s second goal of the series made it 2-0. Tampa Bay extended the advantage to three goals when Callahan scored 33 seconds into the second period.

Outshot by 13-4 and limited to one scoring opportunity in the opening period, the Caps began to put some pressure on Vasilevskiy in the second.

Evgeny Kuznetsov scored a goal for a fourth straight game, giving him 22 points in the playoffs (11 goals, 11 assists) and trimming Washington’s deficit to 3-1 at 4:21 of the period.

The Capitals kept pressing in the third period, but did not break through against until Ovechkin scored his 11th goal this postseason.