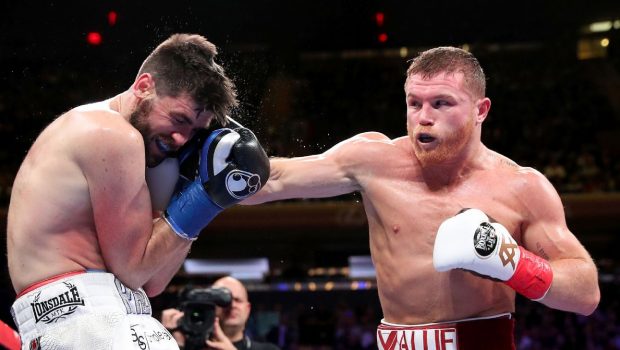 Heavily favored Canelo Alvarez (above right), the unified middleweight world champion and boxing’s biggest star, moved up one weight class and destroyed the game Rocky Fielding with a heavy body attack to take his secondary super middleweight world title in his first non-pay-per-view fight since 2015 at sold-out Madison Square Garden.

Alvarez knocked Fielding down four times, much to the delight of the raucous pro-Canelo crowd of 20,112.

The fight was Alvarez’s first in New York and it represented the first bout of the record-breaking contract he signed in October with new sports streaming service DAZN. Looking for a franchise athlete, DAZN lavished Alvarez with a five-year, 11-fight, $365 million deal to take him off pay-per-view in hopes that he would help drive subscriptions to the $9.99-per-month service.

Alvarez had been under exclusive contract to HBO and was the biggest pay-per-view star of the post-Floyd Mayweather era, but that contract expired in September, and HBO made no move to retain his services because it decided to dump boxing coverage, which it concluded last week after 45 years of covering the sport at the highest level.

Alvarez (51-1-2, 35 KOs), 28, of Mexico, moved seamlessly to his new outlet and shined in his debut against an overmatched opponent in Fielding, whom virtually nobody gave a chance to win or even compete.

The fight was as big of a mismatch as most expected, and Alvarez tortured Fielding to the body.

“That was the plan in the gym, to hit the body and then move up [to the head], and that’s the result. You see the result here,” Alvarez said through an interpreter.