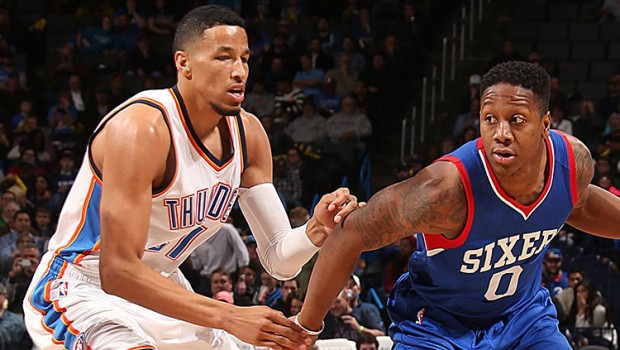 Isaiah Canaan is no Michael Carter-Williams, the Sixers’ point guard who was traded on deadline day to the Milwaukee Bucks.

He might be better, at least as a scorer. Canaan (photos above and left), who was traded from Houston to Philly on deadline day as part of the K. J. McDaniels deal, had career highs of 31 points and eight 3-pointers, and Jason Richardson added 29 points for the Sixers, who were life-and-death with the Oklahoma City Thunder before losing in overtime 123-118.

Westbrook wore a mask and a headband after having a bone in his right cheek fractured last Friday against Portland. He had surgery Saturday and missed Sunday’s game against the Los Angeles Lakers.

It was Westbrook’s sixth triple-double of the season and 14th of his career.

Westbrook clinched the triple-double on a pass to D.J. Augustin that put the Thunder ahead 113-110 in overtime. Westbrook’s pull-up jumper with 38.9 seconds to play put the Thunder up by three, then Westbrook made the first of two free throws with 30.3 seconds left to make it 120-116.

Richardson’s two free throws made it a two-point game.

Canaan was 5 of 5 on 3-pointers early to help the 76ers take a 32-17 lead with 3:30 left in the first quarter. The Thunder responded with a 15-0 run to tie the game, and Westbrook found Mitch McGary for a layup as time expired in the quarter to give the Thunder a 37-34 lead.

The 76ers led 59-56 at halftime, and Canaan’s eighth 3 pushed Philadelphia’s lead to 75-60 before Oklahoma City’s bench rallied late in the quarter and cut the deficit to 90-84 by the end of the period. Nick Collison’s layup tied it at 90 early in the fourth quarter.

The Thunder led 93-90 when Richardson went for a layup. McGary blocked it, and Richardson got a technical for arguing that there should have been a foul. Augustin’s technical free throw was the last point of an 18-0 run for Oklahoma City.

Westbrook made back-to baskets to push the lead to 108-99, the second with the crowd on its feet. Philly called timeout, and the crowd broke into its loudest MVP chant yet for Westbrook.

Hollis Thompson’s 3-pointer with 55.2 seconds to play cut Oklahoma City’s lead to 110-107, and Richardson’s 3 with 27.1 seconds left tied the score, sending the game into overtime.