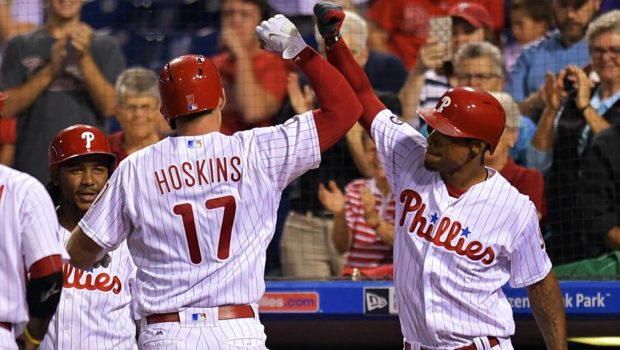 How well will the Phillies do in 2018, you might be asking?

But how much better depends on a lot of elements that are still cloaked in mystery:

Is Gabe Kapler as good at managing as he is at talking?

Will the skinflint red pinstripers spend any money on another starting pitcher?

Thanks to an infusion of young talent and a weakened NL East, there’s a path for the Phils to claim a wild-card spot this October.

A big part of this return will be the handiwork of burgeoning stars Rhys Hoskins and Maikel Franco.

Whether new manager Kapler will propel his team or prove a stumbling block remains to be seen, but he’s inheriting a young and talented roster.

Across the infield, only first baseman Carlos Santana is older than 27, and he’s hardly a grizzled veteran at just 31. And the outfield is just as young.

How it will do in 2018 is admittedly a question mark because this is an offense that did few things well last season, ranking near the bottom of the league in runs scored, home runs, batting average, strikeout percentage and walk rate. Such are the perils of youth.

But don’t expect the Phillies to repeat this in 2018; they have several players on their offense who will contribute to a turnaround. Take Hoskins, for example. The 2014 fifth-rounder popped up in mid-August to hit 18 home runs and rock a near-.400 on-base percentage in 50 games. Despite playing in just a fraction of the season, he was worth 2.2 WAR. A prime candidate to take the bulk of the starts in left field, Hoskins will be a difference-maker for the Phillies offense.

The 25-year-old Franco is entering his third full season in the majors, and despite a significant drop-off on offense from 2016 to 2017, his struggles last year were largely caused by flailing at sliders during the first two months of the season.

Franco’s bat stayed rather cold until late May, and then things gradually improved — though he still finished the season hitting just .186 against the slider and whiffing at the pitch nearly 20 percent of the time. Franco has some work to do there, but despite his other shortcomings at the plate he still hit 24 home runs in 2017 and upped his walk rate while dropping his strikeout rate from the previous year.

Outfielder Odubel Herrera also possesses the potential to swing the offense, albeit with some scary peripherals with his bat. He may have slashed .281/.325/.452 in 2017, but he did so while walking only 5.5 percent and striking out more than 22 percent of the time. Thankfully, Herrera is a major boon on defense, worth 20 defensive runs saved through three seasons.

Along with these three, the Phillies have J.P. Crawford set to take over at shortstop after the trade that sent Freddy Galvis to San Diego. Crawford might not have wowed Philadelphians at the plate during his debut last season, but he showed some very encouraging signs — such as walking more than 18 percent of the time — and he’s one of the top-ranked middle infield prospects in baseball.

Collectively then, the offense is rich with talent. There’s the natural caveat of youth and the unpredictability of an offense driven by players a year or two from their expected prime age, but if a few of them click they’ll need to be reckoned with.

On the mound, the Phillies are admittedly less intimidating. They were a middle-of-the-pack staff in 2017, and barring some additions to the group before the 2018 campaign begins this is not likely to change much. Rumors that the Phillies have been in talks with Jake Arrieta are intriguing, and adding him would bolster the rotation significantly. Even if they don’t reach an agreement with the 2015 Cy Young winner, Alex Cobb and Lance Lynn remain available, so there are options aplenty.

Finally, the NL East is under the reign of the Nationals, and that is unlikely to change this year. However, the rest of the division is questionable at best, and the Marlins at worst. The Phillies will reap some benefit from their weak division while the Dodgers are engaged in the dogfight that will be the NL West and the Cubs are busy fending off the Brewers and Cardinals.

This could all turn out to be laughably wrong, but over the months of the baseball season there’s ample chance for surprise — and Philly has many of the right pieces to make them contenders. With two wild-card spots to be claimed, the Phillies should absolutely be in the mix to reach at least the one-game playoff this October.