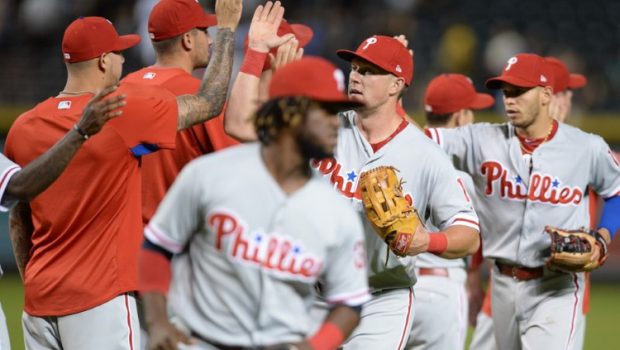 CAN PHILLIES ATTRACT PRIMO FREE AGENTS TO IMPROVE IN 2019?

The Dodgers and Red Sox are playing Game 3 of the World Series tonight in L. A., so let’s take a look at the 2018 Phillies, the good and bad and ugly, and where they’re going in 2019:

The season didn’t end well, but the Phillies still finished with their best record since 2012 under first-year manager Gabe Kapler.

While Kapler received plenty criticism for his in-game moves, lack of a steady lineup, shifts, and reliance on analytics in general, things are legitimately looking up for this franchise.

Ace Aaron Nola emerged as a legitimate Cy Young Award contender this season with a 2.37 ERA across 33 starts.

The Phillies had four pitchers (Nola, Jake Arrieta, Nick Pivetta, and Zach Eflin) reach 30 starts, though they were more effective as a group during the first half than the second half.

While we can’t ignore defense here, Rhys Hoskins amassed 34 homers and 96 RBI while Maikel Franco finally showed some signs of life (.780 OPS, 106 OPS+) offensively. Carlos Santana had more walks (110) than strikeouts (93) and was generally as advertised after a quiet April. Jorge Alfaro still has a flawed approach, but he’s making improvements behind the plate. The Phillies have a pretty solid core for their bullpen with Seranthony Dominguez, Hector Neris, Pat Neshek, Tommy Hunter, Edubray Ramos, and Victor Arano.

The Phillies essentially punted on their defense and it came back to bite them down the stretch.

After going into August 7 in first place in the National League East, the club went 16-33 down the stretch. Only five teams in MLB scored fewer runs after the start of August.

The Carlos Santana signing pushed Rhys Hoskins to left field, where he was a serious liability. Asdrubal Cabrera was forced to see a bunch of time at shortstop after being acquired from the Mets. The Phillies even played Santana at third base several times down the stretch in order to get Justin Bour’s bat in the lineup. Odubel Herrera got off to a great start before trailing off over the final four and a half months and now finds his future with the organization in question. Cesar Hernandez’s production dropped off from 2016-2017 while J.P. Crawford had a lost year due to injury. Rookie Scott Kingeryentered 2018 with some big expectations after inking a six-year, $24 million extension in late-March, but he struggled with a brutal .605 OPS in 147 games.

Nola took an encouraging step forward in 2017, but he emphatically stated his case as one of the best pitchers in the game this season, with a 2.37 ERA and 224/58 K/BB ratio in 212 1/3 innings over 33 starts. He allowed more than three earned runs just four times and didn’t allow more than four runs in any start. In any other year, Nola would be a serious threat for National League Cy Young Award honors, but he has Max Scherzer and Jacob deGrom to contend with in the balloting. That doesn’t take anything away from Nola, who earned every bit of his success this year. He displayed excellent control once again while inducing more swinging strikes than ever before and a ground ball rate north of 50 percent. The Phillies’ defense presents a cause for concern right now, but hopefully there are some positive changes in that area during the offseason. Either way, Nola looks like a top-10 fantasy starting pitcher.

It’s unfair to expect anyone to duplicate the sort of production that Rhys Hoskins showed in a 50-game stretch as a rookie last season, so it wasn’t surprising to see some drop-off during his first full season in the majors. It was a year of wild peaks and valleys, especially during the Phillies’ late-season swoon. Still, Hoskins led the Phillies in home runs (34), RBI (96), and OPS (.850). He also continued to show good patience. We saw some decreases in his average exit velocity and hard-hit percentage, but he made up for that somewhat by increasing his fly ball rate from 45.2 percent to 51.7 percent. His strikeout rate was also right around the league average, so he’s making plenty of contact. Hoskins is a legitimate middle-of-the-order force and boasts multi-position eligibility for fantasy owners, though that’s saying nothing of the real-life impact of him continuing to play left field. Kapler recently acknowledged that Hoskins would prefer to play first base. Something might have to give with Carlos Santana, whether it’s playing him more at third base or maybe even exploring a trade.

Jake Arrieta’s free agency lingered into the early part of March before he finally landed a three-year, $75 million contract. The contract was much lower than once expected and the first year of the deal suggests that there was some reason for that beyond teams simply not wanting to pay free agents. The 32-year-old posted a 3.96 ERA (105 ERA+) in 31 starts to go along with a 138/57 K/BB ratio over 172 2/3 innings. His strikeout percentage was tied for 47th among qualified starters while his swinging strikeout percentage checked in at 56th. Just for reference, Arrieta was eighth and 19th in those very same categories during his Cy Young Award campaign in 2015. He’s actually trended down for the past couple of years, so we can’t just assume there’s going to be a sudden resurgence. Arrieta is still a fine rotation piece for Philadelphia, but don’t overvalue him based on the name recognition.

Maikel Franco enjoyed an unexpected resurgence at the plate in 2018. After seeing his OPS fall from .840 to .733 to .690 from 2015-2017, he bounced back with a .780 OPS to go along with 22 homers and 68 RBI over 131 games. What changed? In truth, it’s hard to say. Franco swung at more pitches outside the zone than ever before and he didn’t see any major changes in regard to his average exit velocity, hard-hit percentage, or launch angle. He also hit the ball on the ground more often. It’s certainly nice that he makes contact, but there’s something to be said for making quality contact. Franco said at one point that a conversation with Carlos Santana helped turn his season around, but that’s very difficult to quantify. There’s some bankable power here with regular at-bats, but Franco remains a pretty vexing player in general. One wonders if this could be the ideal time to trade him, especially with so many moving parts in the Phillies’ infield and Machado as an expected offseason target.

Nine different pitchers notched saves for the Phillies this season, tying a franchise record, as Kapler showed that he wasn’t bound to the norms associated with having a designated closer. Hector Neris saw most of the early chances before his struggles eventually sent him to the minors for a stretch. Rookie Seranthony Dominguez was the primary option around the middle of the season, but it was pretty wide open down the stretch. It’s anybody’s guess how Kapler will handle things next year, but he has multiple solid options, especially if Neris looks like the pitcher he was during the second half. Dominguez, a former starter in the minors, might be the most exciting option from a fantasy perspective after posting a 2.95 ERA, 0.93 WHIP, and 74/22 K/BB ratio through his first 58 innings in the majors.

It looked like prospect Scott Kingery would begin the 2018 season in the minors, both because of service time considerations and the lack of a clear path to playing time, but he broke camp with the team after signing a six-year, $24 million extension toward the end of spring training. The highly-touted 24-year-old got off to a nice start over the first couple of weeks, with nine extra-base hits and an .855 OPS in his first 13 games, but it was a real struggle for him after that. He hit just .219/.260/.313 over his final 134 games, giving him a lowly .605 OPS for the year. Only four hitters (min. 450 PA) ranked lower in wRC+ and wOBA. Kingery had some issues making contact and regularly found himself behind in the count. His average exit velocity was also alarmingly-low. Being pushed into regular shortstop duties on the fly probably didn’t help matters, but it was a disappointing showing after the big numbers he posted in the minors. Ideally the Phillies will have patience with Kingery and play him regularly at second base in 2019, but there are all sorts of variables with a team who appears ready to go for it, including the presence of Cesar Hernandez, the pursuit of Manny Machado, and fallout with other internal options like J.P. Crawford, Maikel Franco, and Carlos Santana. It would be foolish to give up on Kingery after just one season, but he’s going to have to earn his way on the mixed league radar.

A proven bat is at the top of the list and the Phillies have the payroll flexibility to make a big splash. And we’re talking about the very top of the market here.

The Phillies were involved in trade talks for Manny Machado during the season and they’ll almost certainly be one of the frontrunners once he’s officially on the open market. Are they willing to go to $300 million? Bryce Harper is also a possibility. The Phillies could use another rotation arm —ideally a left-hander — with Dallas Keuchel, Patrick Corbin, and J.A. Happ among the possible fits.