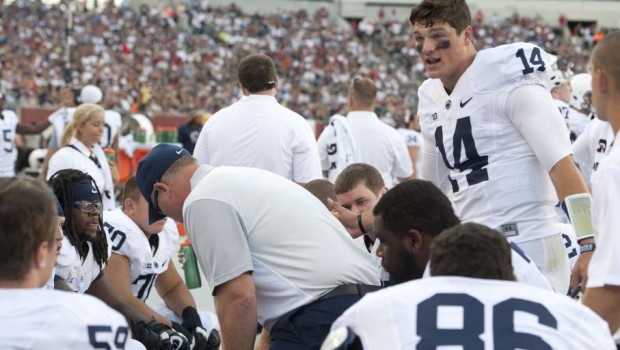 CAN PENN STATE AVOID ANOTHER HACK ATTACK AGAINST BUFFALO”

Penn State quarterback Christian Hackenberg spent most of last Saturday’s wipeout by Temple picking himself off the deck, so:

“I don’t know if you’re necessarily gonna see a bunch of new starters,” he said. “I think you’re gonna possibly see some guys move around. Things like that.”

Redshirt freshman Chance Sorrell and redshirt junior Wendy Laurent “could possibly figure in, as well,” Franklin said. “But I think more than anything I think you’re gonna see some moving parts.”

Veterans Brendan Mahon, Angelo Mangiro, Brian Gaia and Andrew Nelson started on the line, along with junior college transfer Paris Palmer, and did not acquit themselves well as a unit, although “everyone had a role in (the sacks)” Franklin said. “The coaches, the offensive line, the running backs, the quarterbacks, the receivers.”

After spreading around the responsibility, Franklin acknowledged “it starts up front” when it comes to building an offense (and defense, too).

“The better you are up front, the more flexibility and the more creative you can be in terms of attacking the defense, in terms of solving problems, in terms of dictating the style of play,” he said. “There’s no doubt about it.”

Franklin said “communication issues” plagued the line, which is what returning veterans cited as a big problem last season. A better running game also would help, he said, as well as moving the pocket around and “you have to be willing to take shots down the field” when opponents load up the line of scrimmage. “You have to threaten them deep to loosen them up.”