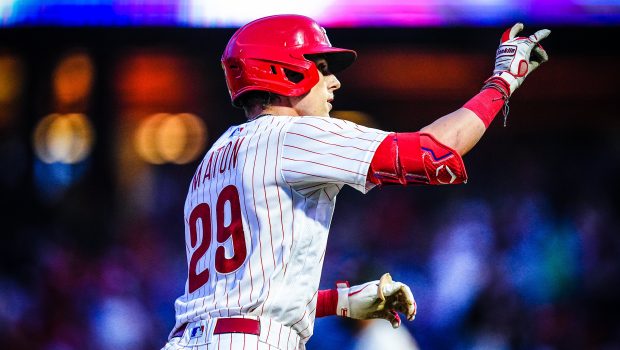 What to expect from Nick Maton for the rest of this season?

Could Nick Maton be the answer?

He’s not a new player, and he showed signs of promise at the plate last season, however he was an individual that was not being utilized as much as he is now by the organization.

Nonetheless, the inclusion of Maton in recent games this season appears to have provided the Phillies with some fresh air, and could perhaps help them to achieve some of their aims this season, including reaching the postseason and competing for the World Series.

The Phillies are currently 9-1 over the last 10, thus giving them the chance to potentially accomplish that aim.

Indeed, Maton is batting .600 since he came back from a shoulder injury.

The 25-year-old 2017 seventh-round pick has been able to prove that he can be a hard-hitting, contact-plus type hitter.

As mentioned, the infielder has shown promise in the MLB beforehand, as he managed .256/.323/.385 while he was playing defense at middle infield in the 131 plate appearances he made, but it does appear as though he has been able to develop further and appear to be a star of the future. Throw in the fact that he achieved .261/.368/.436 over 250 plate appearances at Triple-A, it is clear that he has a bright future.

Maton is well-liked and already being compared to stars

While Maton is proving himself when getting the chance from the bench, it seems that he is a well-liked individual and one that has already made an impression among many others who have been watching on, including those that like to participate in sports betting across Philadelphia and other states where it is legal.

When you check the odds by Caesars for the Illinois local whenever he plays, it would seem many expect him to be able to produce when he steps up to the plate, with the infielder regularly being provided with handsome prices.

Indeed, there are punters who will continue to wager on him as he continues to get older and gets more opportunities, and those who do will perhaps be encouraged regarding the opportunities available given what has been said about the 25-year-old.

For instance, he is well-liked by the rest of the locker room, with the current roster continuing to describe him as a player that any team would love to have in regard to his personality and his inquisitive nature. Additionally, there have been Phillie greats that have spoken about him highly, with Larry Bowa comparing Maton to Chase Utley because of the work ethic he has.

Is Maton the answer for the playoffs?

However, perhaps the biggest question that remains at the moment is in regard to whether Maton is the man to be able to get the Philadelphia Phillies to the playoffs.

The organization last appeared in the postseason a decade ago, with this season being the eleventh attempt in which the franchise will look to try and compete beyond the end of the regular season. However, that could potentially change by the time the MLB season comes to an end.

The team is currently in one of the three Wildcard spots that have been made available to obtain, and their run of 9-1 over the last 10 – or 12-1in the last 13 games – has helped to propel them into the conversation as possible contenders.

However, they will need to ensure that they continue to win as many as possible, as things are relatively tight. They are only one game ahead of the San Diego Padres (the last occupier), while a further game in front of the Milwaukee Brewers; a team they will not play against again this season.

So, could Maton be the answer? There is an argument to suggest that he could be should he be able to continue to contribute in the way that he has been, however, it could also be considered to be a rather big ask for a player that does not have that much MLB experience.

There is no denying that he looks as though he could be a very good homegrown player for the organization in the future and perhaps once he is a little more experienced and older. He has, though, already shown some impressive signs this season regarding his development and how crucial he could be, and that might be enough for the team to finally reach the postseason for the first time in 11 seasons.

With a vast number of games still to be played throughout August, September, and October, Philly fans’ eyes on what Maton is able to do and whether he is able to contribute positively to the Philadelphia Phillies’ postseason push.

There has already been a lot of positive noise about the type of guy he is and who he reminds certain individuals of, but could a potential weight of expectation be a problem if too many place it on his shoulders and expect him to deliver? Only time will tell in regard to what will happen.