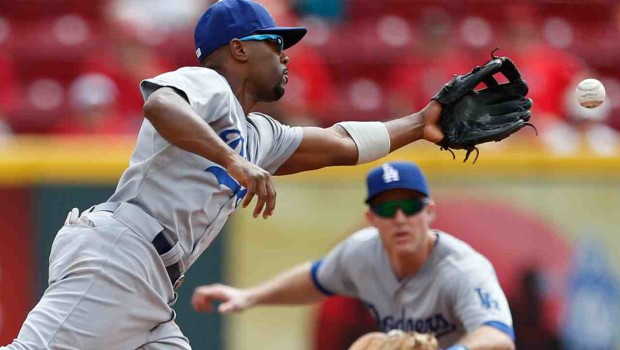 J-ROLL AND CHASE TRYING TO RECAPTURE MAGIC WITH THE DODGERS

Can Jimmy Rollins and Chase Utley do for the Dodgers what they did for the high-flying Phillies five years ago?

The Phillies’ built their World Series contender — and winner (2008) — up the middle: In their combined 28 years in Philadelphia, shortstop Jimmy Rollins and second baseman Chase Utley totaled 449 homers, 1,803 RBIs and 595 steals between them.

Their reunion in Los Angeles, however, had yet to rekindle much of that magic until Utley’s go-ahead homer in a 2-1 win over the Giants last Wednesday, securing the Dodgers’ sweep of the defending World champs.

Acquired in a waiver deal with the salary-dumping Phillies, the 36-year-old Utley entered Wednesday hitting .194/.293/.333 in his first 10 games as the injured Howie Kendrick’s fill-in. He had driven in one run and had six strikeouts against two walks.

Though he has muscled up for 13 homers, the 36-year-old Rollins has been largely inconsistent as well since the Dodgers acquired him from the Phillies in December. He was hitting .222/.276/.359 with 41 RBIs.