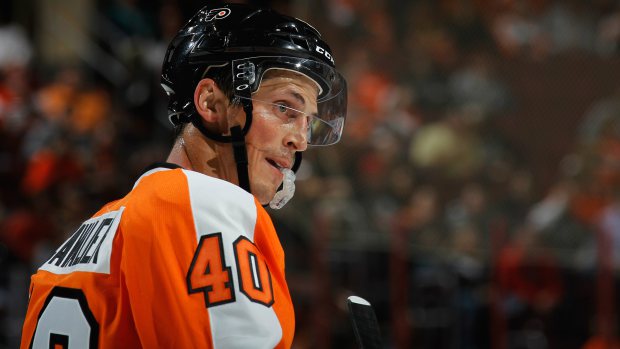 CAN FLYERS’ VINNIE LECAVALIER GET OUT OF BERUBE’S PENALTY BOX?

The Flyers’ Vinnie Lecavalier is of two minds about retirement.

Last week, TSN reported that Lecavalier — a repeat healthy scratch for the Flyers lately — was contemplating retirement in the wake of his demotion to the press box.

Yesterday, Lecavalier refuted those reports. From the Daily News:

Lecavalier denied that claim and said he intends to honor his deal.

“No,” Lecavalier said bluntly. “I’m 34, I’m not 40. I feel good on the ice. I feel like I did 5 years ago. All of the sudden, I’m a healthy scratch. It’s frustrating. I know I have a lot in the tank. I know what I can provide on the ice, and I know what I bring off the ice with my teammates.”

General manager Ron Hextall gave Lecavalier’s agent, Kent Hughes, permission to negotiate a trade this summer for the former league scoring champion. The Flyers would like to move him and it’s clear Lecavalier, who holds a full no-movement clause, would accept an opportunity to play elsewhere.

The big question now is: Where do they go from here?

The situation in Philly seems unresolvable. Other Flyers that’ve been sent messages via the healthy scratch —Michael Del Zotto, Andrew MacDonald — have managed to work their way back into the lineup, but Lecavalier is going on three straight games with no signs of getting back in.

As ProHockeyTalk.com reports, there are also few signs of him getting back in Craig Berube’s good graces. Lecavalier’s never been a favorite of the head coach, and now there have to be concerns about the damage done to Lecavalier’s standing and reputation across the league in terms of a trade. The Flyers could entice a possible move by retaining some of Lecavalier’s $4.5 million annual salary (up to half, so $2.25M), but it’s tough to say what the former Rocket Richard winner would be bringing to a new club, given his production and ice time have plummeted so severely.